After the success of the massive hit RRR, Jr NTR is raring to go to with big-ticket action-packed cinema. All set to be seen as the face of the masses in his next NTR30, the RRR star received an early surprise on the eve of his birthday. 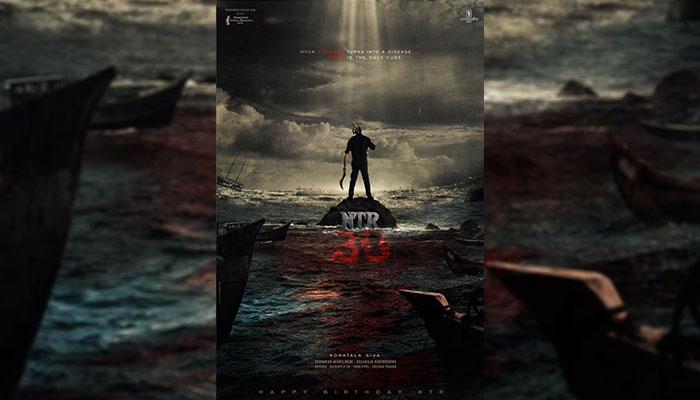 To mark the special day, the makers of NTR30 dropped its theme motion poster. Premised on dark elements of blood and gore, the first glimpse showcases a tussle of fear and courage and it ends on a super powerful note with NTR Jr wielding a sickle knife and an axe. Personifying fear, the actor himself has dubbed the narration of the theme motion poster.

Trending on social media like wildfire, the Jr NTR starrer promises to be an epitome of heroism. Envisaging the film with the biggest script and mass elements, Koratala Siva has vowed that it will be a feast for cinemagoers.

NTR30 marks the reunion of the man of the masses Jr NTR and acclaimed filmmaker Koratala Siva after Janatha Garage (2016). The film brings to the fore a fresh trio of Jr NTR (in the lead), Koratala Siva and music maestro Anirudh.

Presented by Nandamuri Kalyanram, produced by Mikkilineni Sudhakar and Hari Krishna K under the banners Yuvasudha Arts and NTR Arts respectively, directed by Koratala Siva, with music by Anirudh, and starring Jr NTR, NTR30 will hit the floors soon.