Ayushmann Khurrana and Nushrat Bharucha’s first film together, Dream Girl has registered a fabulous first week after a solid opening. Due to good word of mouth, the film remained strong throughout at the box office. While the adjacent release Section 375 got failed to get the desired response despite positive feedback. 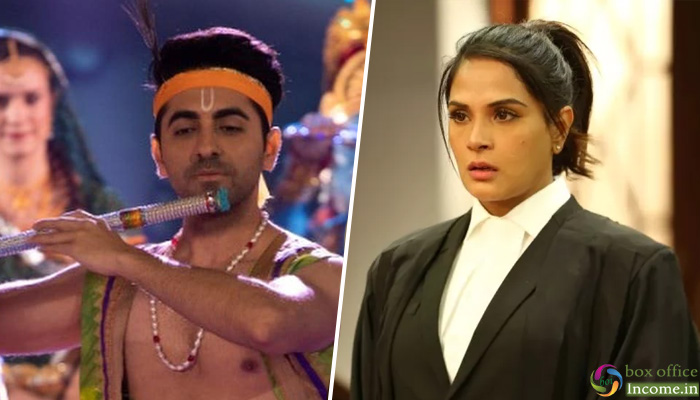 Directed by Raaj Shaandilyaa, the comedy drama has received mostly positive reviews from the critics as well as the audience for its fun-filled storyline. As a result, it did the business of 44.57 crores in the weekend which included 10.05 crores on Friday, 16.42 crores on Saturday & 18.10 crores on Sunday.

Then on weekdays as well, Balaji Motion Pictures’ production showed a solid trend and minted the amount of 7.43 crores on Monday, 7.40 crores on Tuesday & 6.75 crores on Wednesday. On the next day i.e. Thursday, with a slight drop, Dream Girl bagged the amount of 6.05 crores and raised 7 days total collection to 72.20 crores at the domestic box office.

In parallel, Akshaye Khanna, Richa Chadha and Meera Chopra is struggling at the box office since its release despite the positive reviews from the critics as well as the viewers. In the opening weekend, it did the business of only 8.04 crores with 1.45 crore on Friday, 3.07 crore on Saturday & 3.52 crores on Sunday.

On weekdays, after a significant drop, Ajay Bahl’s directorial managed to collect 1.27 crore on Monday, 1.18 crore on Tuesday, 1.09 crore on Wednesday & 0.91 crore on Thursday. After a week, the total collection of Section 375 has become 12.49 crores at the domestic box office.