Netflix India today unveiled the trailer of the year’s most awaited Dhamaka. Presented by Netflix in association with Ronnie Screwvala’s RSVP Movies, Lotte Cultureworks, Global Gate Entertainment and Lionsgate Films, this film is based on the 2013’s South Korean film The Terror Live. 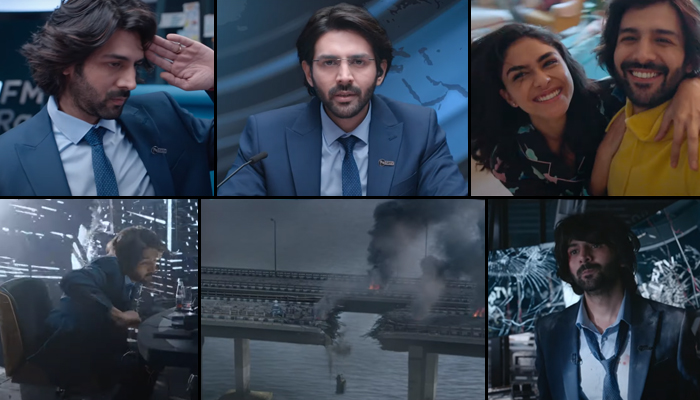 The film features an all-star cast, Kartik Aaryan in the leading role of a journalist named Arjun Pathak, who receives a threat after he exclusively interviewed a terrorist, who blew up a bridge. The film also stars Mrunal Thakur and Amruta Subhash in prominent roles.

Directed by Ram Madhvani, the trailer then shows Arjun fighting his conscience as he gets stuck in a situation. He must make a choice between his career and the humanist in him. Arjun is struggling with his lines and telling the crew to switch off the cameras. Then Amruta Subhash motivates him to do his job and tells him that the show must go on. Despite saying that he cannot do it, Arjun finally resumes his job and says his lines.

Dhamaka, which also stars Mrunal Thakur, sees the actress playing the role of a reporter who is also married to Arjun Pathak. Earlier slated for a theatrical release, now the film will stream on Netflix from November 19.

Kartik has a busy calendar ahead. He will be seen in the Bhool Bhulaiyaa sequel, Shashanka Ghosh’s Freddy, Hansal mehta’s Captain India, and Shehzaada.