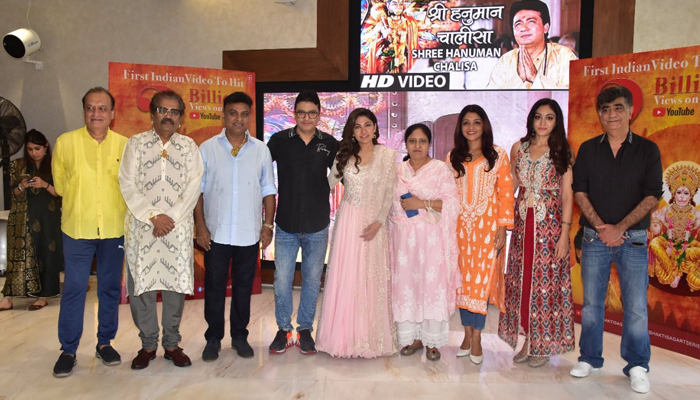 The lunch was organised honouring Shri Gulshan Kumar’s devotional song and seen at the event were Bhushan Kumar along with his Mother, Krishan Kumar, Tulsi Kumar, Khushali Kumar and Tanya Kumar. Singer Hariharan & Composer Lalit Sen were also present at the event serving the guests at the langar with the family.

Shri Gulshan Kumar had always served food to the visitors at the Vaishnaodevi Temple and Bhushan Kumar has now followed suit, stepping into his father’s shoes and taking the family tradition ahead. The Chairman and MD of T-Series hosted an aarti as a tribute to his father’s Hanuman Chalisa crossing the 2 billion views mark, the first ever song in India to do so, followed by a langar organised for his producer and director friends and the entire T-Series family.

Bhushan Kumar said, “It’s a great honour and a matter of pride for us that my father’s iconic devotional song, Hanuman Chalisa has reached such a feat. It is the first song in the country to clock in more than 2 billion views and it is only because of his blessing that we have been able to reach this milestone. I hope he continues to shower us with his blessings and help me put T-Series on the global map.”

The gesture by Bhushan Kumar is surely heart touching and hats off to him to take his father’s much celebrated legacy ahead!