It was 20 years ago when two young dreamers gave Hindi cinema one of its biggest musical hits – TUM BIN. The romantic film marked the successful debut of the film’s writer-director Anubhav Sinha and producer Bhushan Kumar of T-Series. 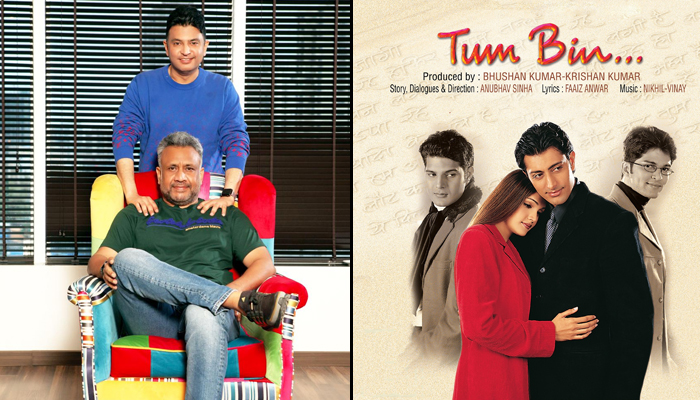 The producer-director duo then gave their all to make their debut film one of the biggest hits of 2001. From trusting and supporting each other’s dreams 20 years ago to today banking on each other’s strengths to create content driven cinema together, their association has gotten stronger and tighter.

After Tum Bin, Bhushan Kumar and Anubhav Sinha went ahead to work on films together like Aapko Pehle Bhi Kahin Dekha Hai, Tum Bin 2 to the recent Taapsee Pannu starrer Thappad that went on to receive several accolades by critics and audience, and upcoming Anek starring Ayushmann Khurrana and Hansal Mehta’s directorial starring debutants Zahaan Kapoor and Aditya Rawal. The duo even worked together for the music marketing of Anubhav’s directorial like Dus, Cash, and Ra.One.

Tum Bin not only marked the debut of its director and producer but also launched 4 fresh faces – Priyanshu Chatterjee, Sandali Sinha, Raqesh Bapat and Himanshu Malik. Tum Bin’s music broke records instantly and trade reports suggest more than 2 lakhs of music cassettes were sold back then. The music of the film composed by Nikhil-Vinay and written by Faaiz Anwar not only became instant hits then but also top several playlists today like Koi Fariyaad sung by Jagjit Singh or the title track sung by K.S. Chithra. The makers, actors and the teams had enough reasons to throw a grand celebration for the success of the film and its music.

Speaking about completing two decades in the Hindi film industry, says producer Bhushan Kumar, “This feels surreal. From taking ahead my father’s vision to today producing films and continuing the main goal of T-Series as a music label, my team and I are grateful to God for a successful 20 years. Tum Bin will always remain special to me. It not only marked my debut as a producer but it also made me believe in my dreams and encouraged me to lead the company. I trusting Anubhav’s vision and his faith in me helped us make a film and music that broke records. I am glad we are still working together and giving our audience films they will love.”

20 years as a director in this industry, Anubhav Sinha says, “It was early 2000 at 3AM I was shooting a music video for T-Series when Bhushan called. He had just seen another video that I had Delivered in the afternoon. It was the third video on the trot that he had loved. He asked me ‘Sir shall we make a film?’ Eighteen months later we released one with AKS also this was two weeks after Gadar and Lagaan. We could only muster hundred and five screens countrywide. I remember standing outside Central Plaza theater at 6 PM with our Bombay Distributor Vimal Agarwal. Looking at the crowd thronging to the box office Vimal Ji with all his experience said ‘Sir, ye to opening lag gayi apni’. That was TumBin.”

“Bhushan and I didn’t even know that night that we would be celebrating the 20th anniversary of the film. Not many films live that long no matter how big a hit. Tum Bin continues to be a hit even with people who were five that year. I wonder how. That was the beginning of A relationship with Bhushan that has reached a stage where none of us can instantly answer how many films we are doing together today. We will have to pause and count. Thank you Bhushan for the break and everything thereafter. Love,” adds Sinha.