The most awaited title track of Kartik Aaryan’s Bhool Bhulaiyaa 2 is out now and the star has just hit the ball out of the park with this one. 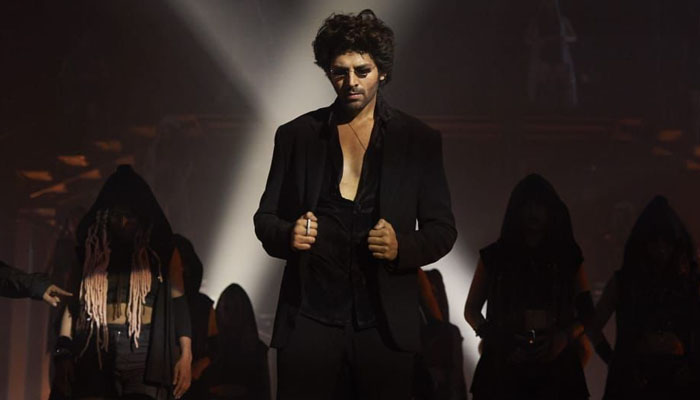 With great music to groove onto, the titular track of the upcoming film is a complete vision. The ‘Master Of Hooksteps’ has given yet another hook step for his fans to take behind and they are all chatter about Kartik’s moves and swag doing it.

In the music video, Kartik Aaryan marks his screen presence as he slips into a black tuxedo, holding a grey cat exuding maximun swag in black shades and a chain around his neck. He later changes into an open red shirt and jeans. The star has looked super hot and shown some of the sleekest moves on this Bosco-Ceaser difficult choreography.

The amazing track will indeed linger on your mind and will make you groove to its beat. This refreshing rendition is crooned by Neeraj Shridhar, music recreated by Tanishk Bagchi, new antara lyrics penned by Mandy Gill (Jam8) and new antara melody composed by Pritam.

The star who has films like ‘Captain India’, ‘Freddy’, ‘Shehzada’, and Sajid Nadiadwala’s untitled next in his pipeline will be seen in Bhool Bhulaiyaa 2 on 20th May 2022.