This Friday saw the release of two major films — Kartik Aaryan, Kiara Advani and Tabu starrer Bhool Bhulaiyaa 2 and Kangana Ranaut, Arjun Rampal and Divya Dutta’s Dhaakad. BB2 has expectedly taken a good start at the box office, while the adjacent major release Dhaakad has got failed to take the desired opening. 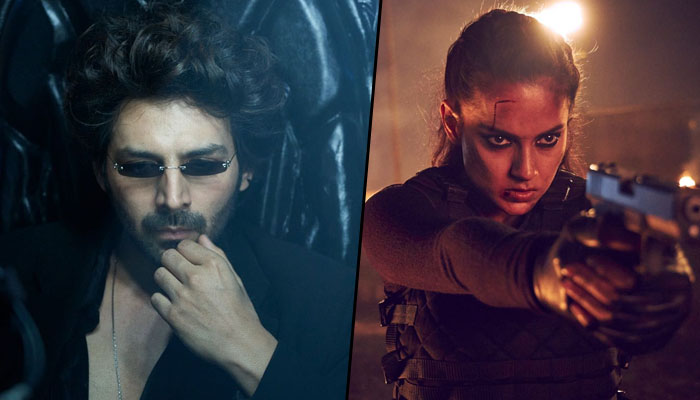 Directed by Anees Bazmee, the Hindi horror comedy has got succeed to entertain many in theatres and gathered mostly positive reviews from critics. The audience is also reacting in its favour as the leading actors Kartik Aaryan, Tabu and Kiara Advani have given their best.

On Friday, Bhool Bhulaiyaa 2 was opened at a solid note of around 35-40% in the morning. Post noon shows, it has witnessed a massive jump in footfalls and registered the opening business of 14.11 crores nett from 3200 screens nationwide.

On the other hand, Razneesh Razy Ghai’s directorial action drama Dhaakad has got failed to convince all the critics because of its patchy screenwriting and overdose of action. From the audience as well, it is getting mixed reactions despite Kangana’s excellent performance.

On Friday, Dhaakad was opened on a slow note in the morning and till the end, it managed to register an average opening business of 0.50 crores nett at the domestic box office from 2200 screens nationwide.