India’s most successful superhero movie Krrish clocked 15 years on 23rd June, Hrithik Roshan shared a video featuring himself as the much loved hero. In no time, the post was flooded with comments from Nora Fatehi’s fans demanding the actress be casted in the upcoming sequel. 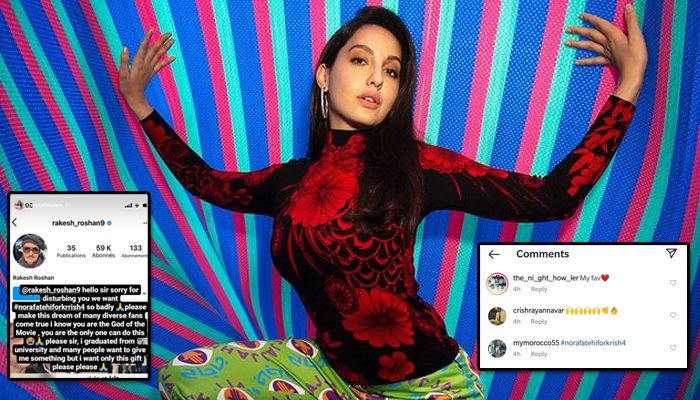 Nora Fatehi has carved a niche for herself as one of the most loved and popular performers of Bollywood impressing the audience with her impeccable dance moves and flawless expressions. As Hrithik Roshan officially announced Krrish 4 on its anniversary, fans poured in comments wanting Nora in the next installment of the franchise.

Fans not only inundated the comments section of Hrithik roshan with demands but also spammed director Rakesh Roshans dms and tagging him in their insta stories. For a brief while, even the Wikipedia page of Krrish (franchise) featured the frenzy created by Nora’s fans acknowledging the demand.

Given the amazing dancing skills and smouldering good looks of both Hrithik Roshan and Nora Fatehi, it would be a visual treat to witness the duo on screen together. Fans have expressed their excitement, putting for the demand, creating a havoc on social media, making Nora Fatehi the only actress sparking a conversation for the casting of Krrish 4.

Apart from Krrish 4, Hrithik Roshan will be next seen in Fighter, which was announced on the actor’s birthday. Proving her versatility with varied performances, Nora Fatehi has emerged as one of the most promising and bankable celebrities of Indian Film Industry. Currently gearing up for her intriguing role in ‘Bhuj: The Pride of India’, Nora Fatehi is set to unveil an interesting line up of projects.