Anurag Kashyap’s much awaited movie Almost Pyaar with DJ Mohabbat that is touted to be his ode to modern love, launched their trailer in Mumbai today. The trailer was launched in a massive event attended by the entire star cast—Alaya F, debutant Karan Mehta, Anurag himself along with the music director Amit Trivedi. 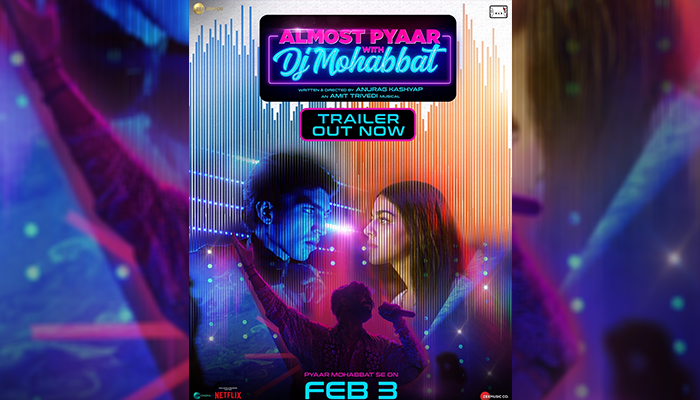 The trailer, which is Gen Z’s take on modern love, looks quite interesting and is an amalgamation of all elements ranging from drama, romance, pain and fun. The trailer launch was followed by a fun interaction with the star cast, Anurag, music director Amit Trivedi and Producers – Ranjan Singh, Kabir Ahuja & Shariq Patel.

Anurag at the trailer launch opened up on the film, saying “It was my daughter who kept making me realise how my generation of people think that we know everything and it is our world, whereas in reality, they are the natives and we are the immigrants. This was the core thought I have tried to explore in Almost Pyaar though my Gen Z protagonists. He spoke of his association with music director Amit Trivedi, “Amit is a great supporter of what I do and our bond is very organic and free flowing.”

Alaya F said,”This was supposed to be my debut film. I was auditioning for couple of films but wasn’t getting anything and started having serious doubts on myself, but then i met Anurag Sir and after watching my reel he instantly signed me for the film .So I’m immensely grateful to him for having that faith in me.”

Debutant Karan Mehta said “It is a dream come true to work with Anurag Sir. I used to make short films and his daughter Aaliyah showed it to Anurag sir and i received a message from him to work on this film.”

Music director Amit Trivedi said,”My bond with Anurag is so organic and I have absolute freedom while working with him. He lets everyone be the way they are and that is the joy of working with him.”

Presented by Zee Studios under the Good Bad Films production is slated to release on 3rd February 2023.