Time and again Allu Arjun has shown how he has deeply rooted in the culture and gives utmost priority to it in his personal or professional life. Marking the auspicious occasion of Ganesh Chaturthi, Allu Arjun welcomes Lord Ganesha to his office and celebrates it with his staff in a grand manner. This year was no different but we can say it was more cherishing altogether when the down-to-earth star stepped down to enjoy the ritual of Ganesh Visarjan with his people. 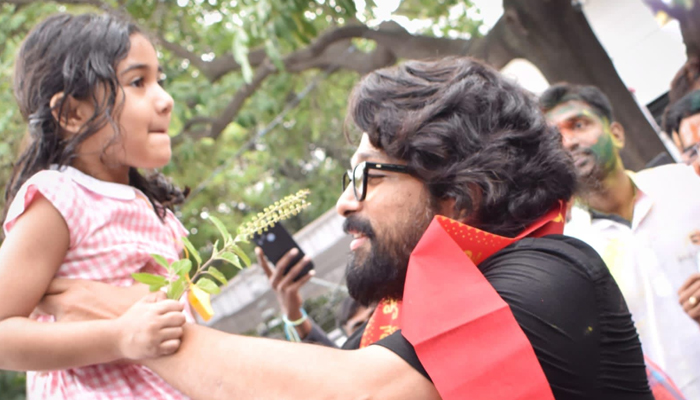 A recent video that went viral shows Allu Arjun enjoying Ganesh Visarjan with his team. An actor with no airs and rooted to his culture, Allu Arjun did not hesitate to get on to the road to celebrate. He broke a coconut as he bestowed an enjoying goodbye to the Lord with his daughter. In fact, he was seen encouraging Arha to be a part of the procession, witness the immersion closely, and learn about the importance of the festival. Moreover, he was seen holding Arha in his hands and the father-daughter duo looked as adorable.

The staar in a true sense, Allu Arjun has always seen considering cultures and heritage as the first priority which was quite evident when he was seen in a viral video spreading the message of keeping the forest clean while he was shooting for Pushpa. Moreover, the actor also plants trees at his place and gifts trees to people. And time and again the stylish staar has proved how he cares for his people and the habitat even when he is shooting or in his personal life.

After the success of Pushpa at the beginning of the year 2022, the actor has been receiving offers from everywhere including Bollywood, brands, etc.

Now if the news about his Hollywood debut happens to be true, this will altogether become the biggest news of 2022 while the shooting schedule of his highly anticipated Pushpa: The Rule has already started.