Kartik Aaryan’s next is Ram Madhvani’s much awaited Dhamaka. The actor had dropped a small teaser of the film to announce its arrival on an OTT giant soon. The small clipping had created quite an impact on the netizens as the actor showed us some never-seen-before reel avatar of himself and the intense role that he has picked of a TV journalist. 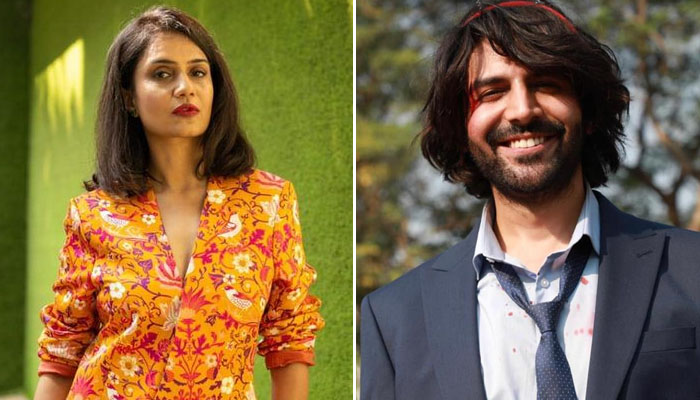 Dhamaka will have Kartik in a lead role and the teaser shows him to get on duty amidst the tension out there in city and the character going through some anxious time. The film also stars Gully Boy and Bombay Begums fame Amruta Subhash. The talented actress recently gave an interview and was all praise for his co-actor Kartik Aaryan. She was supremely proud of the actor’s journey to stardom and kept praising him.

She said that he’s not just a great human being but also a terrific actor and was fun to share screen time with him, “I loved him as a human being. I loved being with him on screen. Because I thought he was very instinctive. Frankly, isske baare mein at length baat karna chahungi when the film is nearer. Because it has again been a very, very long process with him. But let me tell you the instinctive quality issmein maine dekhi thi… Maine agar ussko ek sentence iss tarah se diya, toh woh us tarah se khelega. Woh joh khelna hota hai, woh usske andar maine bahut dekha. Of course, its hardwork,” She states that the heartthrob is an instinctive artiste and that when she gave a line to him, he retorted back instantly with a dialogue and kept improvising on the set. Now that’s one quality very rare young actors possess.

Amruta Subhash further notes down his journey that how he came from Gwalior, stayed in Belapur (far off suburbs in Mumbai) in a small flat with other aspiring actors, travelled in local trains to get to auditions and finally achieved his dreams. “It’s so great that his dream got a happy ending. I heard that story of how he travelled in trains for auditions. I was really proud of that boy, when I heard about his personal journey. It was great and I will talk in length about his process at work during Dhamaka release.” Now that’s indeed true, Aaryan’s sweet journey to success always makes everyone proud.

Amruta Subhash even added that when the trailer dropped, several female friends of hers texted her about Kartik Aaryan, “Jab teaser aaya tha, mujhe joh messages aaye the ladkiyon se for Kartik. Woh stardom joh usski hai, I am so happy for him, so proud of him and I keep blessing him.”

While KA journey has always left everyone amazed and him being a sweetheart on the set is no new news to us, we surely awaiting to watch his Dhamak-edaar performance on screen. As Amruta Subhash says that the man has done a great job in the film and one has to wait for it to watch it. Kartik Aaryan is currently recovering from COVID and will get back to work once he’s tested negative. He has Bhool Bhulaiyaa 2 to wrap and then might start work on Ala Vaikunthapuramuloo remake.