Sai Tamhankar has made a mark in Bollywood with movies like Hunterrr, Love Sonia, Ghajini, and Black&White. The versatile actress is all set to essay a pivotal role in her upcoming movie Mimi. Starring Kriti Sanon, Pankaj Tripathi, Manoj Pahwa, and Supriya Pathak, the movie is produced by Dinesh Vijan and directed by Laxman Utekar. 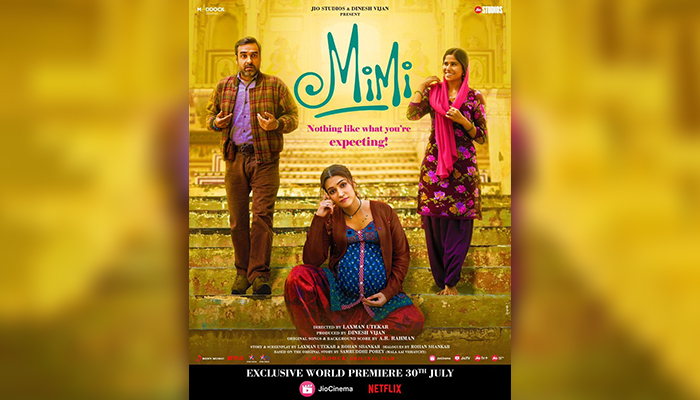 Having stunned the audiences with her performances, Sai is often seen adorning trendy & modern outfits during her outings. Coming out of such her shell, we will see her as the perfect docile Indian woman in the upcoming movie, who supports Sanon’s character through all the hardships of life.

Sharing the new interesting poster of Mimi, Sai wrote, “This July, the unexpected offer will change her LIFE! Delivering the #MimiTrailer in 3 days, #Tuesday! #NothingLikeWhatYoureExpecting! #Mimi releasing on 30th July on @officialjiocinema & @netflix_in.”

A Maddock Original, Mimi’s trailer will be revealed on July 13th. Following the journey of a surrogate mother, the movie will be streaming on Netflix and Jio Cinema.