Leaving his young co-actor shocked and pleasantly surprised, Aayush Sharma gifted Prem Dharmadhkari a Play Station on the sets of his upcoming film Antim. The actor who has been shooting in Pune and Mumbai for his upcoming action entertainer Antim-The Final Truth showed his affection towards a young actor by presenting him with PS4. 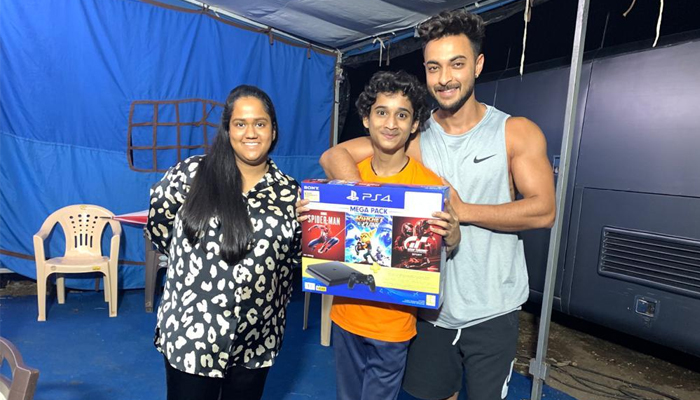 The 15-years-old Prem Sandeep Dharmadhikari was overwhelmed with his kind gesture and couldn’t stop praising Aayush Sharma whom he fondly calls Aayush dada, “We were shooting in film city when before wwrapping the shoot at night he said to me there is a surprise for me tomorrow. He had earlier asked if I play games and I informed him I am fond of mobile and computer games. On the next day I was shooting downstairs and he was at the helipad, I went up to meet him and he greeted him with a hug and sat me down on a chair and called for someone saying ‘Get my brother’s gift’. He got a big red coloured bag and handed it to me, I read PS4 through it and sat on the floor in shock. He was laughing hysterically and said ‘It is just a small gift’.”

Aayush regularly checks on the young actor, talking about the same Prem said, “Between the shoots I would visit home as I stay in Pune itself, he would ask me if I played PS and check on what I was liking, I told him I like playing Spiderman, hearing that he warned me to not try the stunts at home. He also enquires about my studies and calls me on phone when we aren’t shooting to check up on me.”

Recalling their initial interaction Prem revealed, “When we met on the first day of my shoot, he made me comfortable by chatting with me and always encourages me by praising my acting. We eventually developed a strong bond and he fondly calls me his younger brother, he even asked me to help him learn Marathi. He showed me his vanity and asked me to let him know whatever I need, he will ensure I get what I want.”

Expressing his thoughts about working with Aayush Sharma, Prem shared, “It is a splendid experience working with Aayush dada because he is such a humble and down-to-earth human being, he interacts with everyone and greets even the junior actors from the mob as well despite not even knowing them personally. He is very affable and I always look forward to chatting with him. We have a team lunch before shoots post which we commence the filming of scenes, I am majorly with Aayush dada if I am on the sets.”

Aayush Sharma is a young and hands-on father who shares an extremely adorable bond with his two kids- Ahil and Ayat. His social media is the testimony of his close affinity with his kids.