Inching closer to the release, Aayush Sharma’s ‘Antim: The Final Truth’ is creating huge anticipation amongst the fans owing to the impactful teaser and motion poster. After announcing the release date recently, the makers are gearing up for the trailer, hint of which was shared by Aayush Sharma while expressing his gratitude. 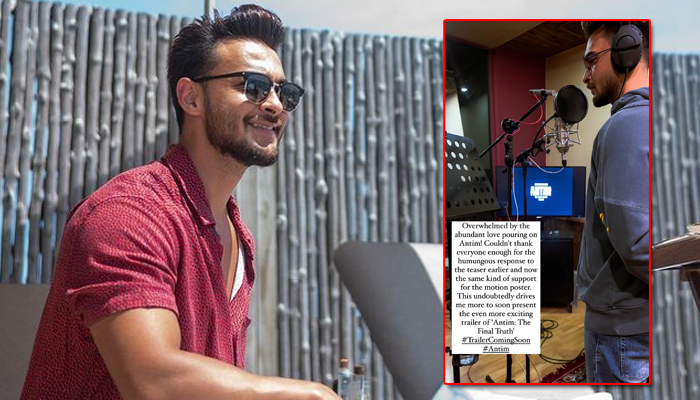 Sharing a picture from the dubbing of Antim’s trailer, Aayush Sharma poured his heart to thank everyone for the warm response saying, “Overwhelmed by the abundant love pouring on Antim! Couldn’t thank everyone enough for the humungous response to the teaser earlier and now the same kind of support for the motion poster. This undoubtedly drives me more to soon present the even more exciting trailer of ‘Antim: The Final Truth’ #TrailerComingSoon #Antim”.

Ever since the first look of the film released, there has been immense excitement for the film owing to the phenomenal transformation of Aayush Sharma as the dreaded gangster Rahuliya. Locking horns with the mighty and idealistic police officer played by Salman Khan, Aayush Sharma’s Rahuliya portrays the deadly and menacing avatar of a gangster.

Personifying dedication and perseverance, Aayush Sharma has garnered accolades from all quarters for his sheer commitment to his craft and character by not just transforming himself from a lean, simple guy-next-door to a robust, muscular gangster but also shooting despite a fractured palm.

The first song from the film titled Vighnaharta gave an insight into the enthralling action sequences of Aayush Sharma as well as displayed the swift dance moves of the actor.

All set for a theatrical release on 26th November 2021, Aayush Sharma’s ‘Antim: The Final Truth’ is one of the most awaited films of the year.