KGF Chapter 2 is by far the most awaited and anticipated film of 2021, not very long ago did the makers announce a part 2 for the film. For the longest time fans have been awaiting for the release date of the film and the wait is now over. On Friday evening the makers took to their soical media handle to announce the release date of the Yash starrer. 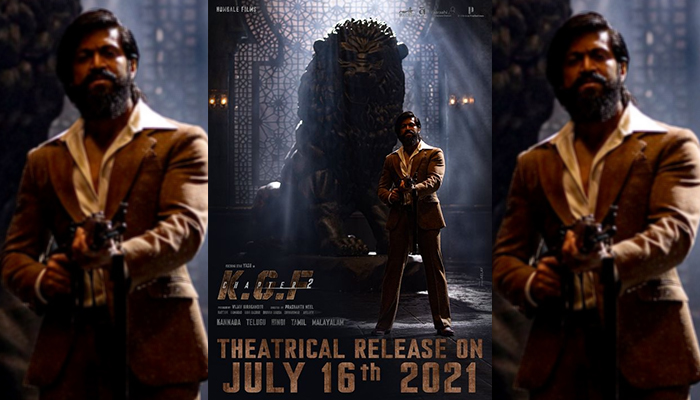 Now, the makers of the KGF: Chapter 2 announced the release date of the Yash starrer and it’s releasing on July 16, 2020. It’s a theatrical release, you guys! Sharing the good news on Twitter, the 35-year-old actor wrote, “Fasten your seat belt coz the date is set..”

Meanwhile, the makers released the teaser earlier this month on Yash’s 35th birthday and it became viral in no time. Within 24 hours of the release, the teaser crossed 50 million-plus views. KGF: Chapter 2 got delayed due to unforeseen circumstances but the love and patience from the fans never lowered. The shoots were wrapped up just recently with the last shoot schedule taking place from December to January start.

Post the success of the first teaser, the makers are reportedly planning to release the second teaser soon. According to SpotboyE, the makers of KGF Chapter 2 including director Prashanth Neel are elated with the success of the Yash starrer and want to release the second teaser for fans. “This is bigger than anything he had ever anticipated. Yash and his director Prashanth Neel are stunned by the response. Fans of KGF want more. Yash and Prashanth are now planning to release another teaser in the next few weeks. Also, the release plans for KGF Chapter just got bigger,” the source added.

Revealing the plans, the source added, “Initial plans of releasing around 2000 prints across India have now been doubled. The Kannada film will be dubbed not only in Hindi, Telugu, Tamil and Malayalam but also in several foreign languages. KGF Chapter 2 is going to get a wider release than any Indian film across the world.”