The official trailer of War was unveiled on Tuesday, 27 August, amid much excitement. According to the sources, Shroff will be playing a Government agent who has been trained by Roshan’s Kabir. However, since Kabir has gone rogue, it is up to Khalid to bring him back so that he can be processed and what not. 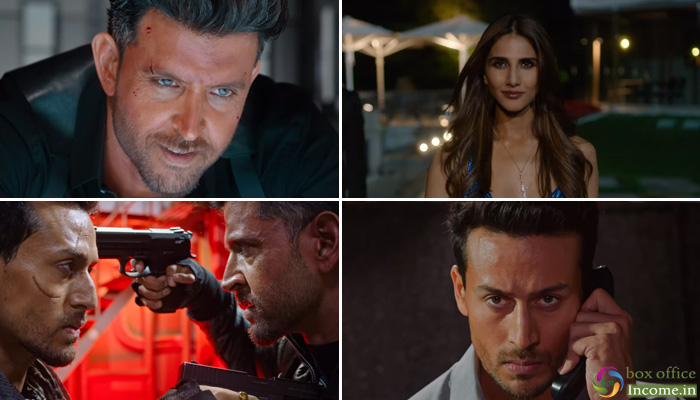 The 2.25 minutes trailer showcases Hrithik as the Guru out on a mission that seems to be against his own team, and Tiger as his long time disciple trying with all his strength to stop him. There are high-octane sequences, some heart thumping moments and Vaani Kapoor’s hotness is a bonus further added.

Hrithik Roshan and Tiger Shroff shine equally. They look good and they pull off the stunts with ease. Seeing their war of words, wits and muscle is a treat. One only sees fleeting glimpses of Vaani Kapoor but she certainly adds to the film’s oomph factor.

War has been shot in 7 countries and 15 cities across the world. The makers have also roped in four action directors to choreograph its stunts. These include Paul Jennings (The Dark Knight, San Andreas, Jack Reacher and Game of Thrones), Franz Spilhaus (Safe House, Eye in the Sky, Death Race), Sea Young Oh (Age of Ultron, Snowpiercer) and Parvez Shaikh (Tiger Zinda Hai, Kesari, Mary Kom).

War also stars Anupriya Goenka and Ashutosh Rana. This film is directed by Siddharth Anand and produced by Aditya Chopra under his home banner Yash Raj Films. The much-awaited action flick is slated to release in Hindi, Tamil and Telugu on the big National Holiday of Gandhi Jayanti, October 2, 2019.