Finally it is time for War! Directed by Siddharth Anand, produced by Aditya Chopra under his banner Yash Raj Films. The death-defying stunts, Hrithik and Tiger’s chiseled body, beautiful locations and songs– all elements is important of the film. 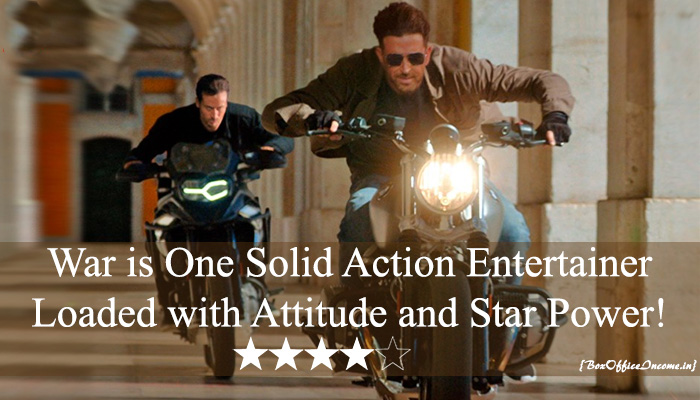 Plot:- WAR is the story of two patriotic soldiers fighting against each other. Khalid (Tiger Shroff) is the son of an army officer, who had joined hands with the enemies. As soon as Khalid’s mother (Soni Razdan) found out, she informed the army and the father got killed by fellow officer, Kabir (Hrithik Roshan). For an important mission, Khalid is assigned a part in Kabir’s team. Kabir obviously is apprehensive but Khalid wins him over with his loyalty and bravery. The story then moves two years ahead. What happens next forms the rest of the film.

Performance:– Speaking of the performances, War! belonged to Hrithik Roshan. From death-defying action sequences to phenomenal dance moves, he will keep you glued to the 70-mm screen. Everything about his personality was simply brilliant.

Tiger Shroff’s action as expected is out of this world and it’s commendable the way he fights baddies in the long action sequence in the beginning. Vaani Kapoor (Naina) has a very late entry but manages to impress with her performance. The rest of the supporting cast, which includes Ashutosh Rana, Anupriya Goenka and Arif Zakaria had limited screen presence which is good.

Direction:- Siddharth Anand direction is simple and he shows that he has the ability to handle a film of this scale and it shows. The film’s first half already delivers everything we could ask for and it is only amplified in the second half, eventually culminating with a thrilling one-on-one fight.

Final Words:- Overall, the film’s wide release during the long holiday should definitely work in its favour. Add to that, the popular starcast of the film will ensure that the movie sails through comfortably at the box-office. So, if you are looking high-octane action scenes, sleek visuals, melodious music and if you love masala movies, then War should definitely be your pick for this extended weekend. SURE-SHOT BLOCKBUSTER.