Hrithik Roshan and Tiger Shroff’s highly-awaited action drama War is all set to hit the screens this Gandhi Jayanti amid the huge excitement of fans as well as the moviegoers. All the fans of across the world were eagerly waiting for this action drama since last year and now when the D-day is near. 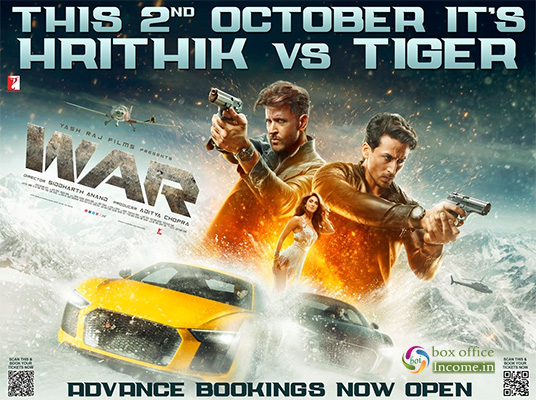 Due to powerful promos, wide-scale promotions & the super-stardom of Hrithik, War has gained a good hype among the audience, despite all of that makers have started advance booking for the film little late as compared to the previous biggies.

Anyways, advance booking for War is now open across the country including single as well as multi-screen cinemas and as per reports, getting a good response. Also, the early reviews are in complete favour of the film, which can result in terrific numbers at the box office.

Including Hrithik-Tiger, Vaani Kapoor also in the lead roles. Directed by Siddharth Anand, while it is produced by Aditya Chopra under his banner Yash Raj Films. As a part of the promotions, the two stars have been spotted around the city wearing t-shirts with trolls against each other.

They are providing the audience with 5 days of pre-booking time to ensure that the film opens to record-breaking numbers. ‘WAR’ will definitely have a great footfall given the national holiday on Gandhi Jayanti. It will continue to have a smashing run at the Box-Office until the weekend.