Vikrant Rona star Kichcha Sudeep and Jacqueline Fernandez shoot for a song that was shot at a specially erected set in Bengaluru. The Bollywood star was flown in by a chartered flight and they shot for a song that the makers have left no stops in ensuring it was everything extravagant. 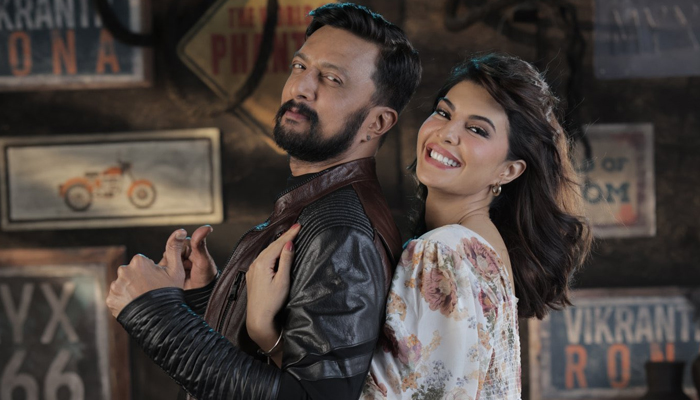 “Rarely do we end a film with the same vibe we would have started with. Everything and everyone around were so positive. Thanks to each member of Vikrant Rona for the warmth and love. Thanks Jacqueline for bringing in so much energy into the song and the film. Your dance did make me deliver a step or two too. Spread the warmth the way you always do. (sic)” shared Sudeep.

The song is definitely going to be a big extravaganza for fans, promise the makers. Director Anup Bhandari says, “Having Jacqueline aboard adds another pivotal dimension to the story of Vikrant Rona, the world’s new hero. We welcome her to the team. We’re creating a big visual extravaganza for the audience and we’re excited to have stars on our side.”

Jack Manjunath says, “Jacqueline’s body of work testifies to her being a crowd-puller. Although not much about her role can be revealed at this point, her entry spurs a turn of events that will be worth watching out for.”

Jacqueline says, “Vikrant Rona is an ambitious film that intends to tell an Indian story that will stand out across the globe. I’m glad to have been signed on for an action-adventure that is being envisaged on such a humongous scale. I’m truly excited and I hope it’s the film that revives the spirit of theatres.”

The song has been sung by Vijay Prakash and Sunidhi Chauhan in Kannada. Bollywood lyricist Shabbir Ahmed has written the Hindi lyrics. The Hindi song is yet to be recorded. Jacqueline herself is thrilled about this film and shares that she is hoping this film will be a crowd-puller that it aims to be.