Salman Khan’s next Antim: The Final Truth is gearing up for release and even before the trailer of the film, the makers have dropped the first song “Vighnaharta” as Ganesh Chaturthi celebrations begin. The music video for the song features Salman and his co-star Aayush Sharma. Varun Dhawan also makes a surprise appearance in the music video. 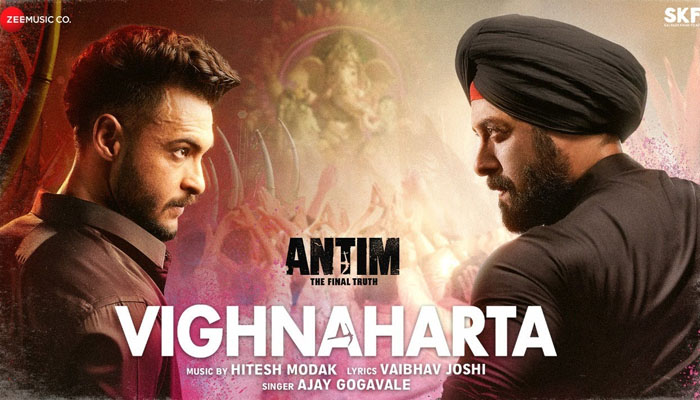 Salman Khan took to his Twitter handle to share the song with the caption, “#ANTIM ki shuruaat BAPPA ke Aashirwad ke saath. #Vighnaharta Song Out Now.” With vocals by Ajay Gogavale Vighnaharta has been composed by Hitesh Modak with lyrics by Vaibhav Joshi.

The track, while high on energy, has a devotional spirit to it. The music video gives us a sneak peek of the intense action sequences that will feature in the film. As revealed before, Salman is playing the role of a cop here and it appears that Aayush’s character is on the wrong side of the law.

Antim: The Final Truth is the first project where Salman is sharing screen space with his real-life brother-in-law Aayush Sharma. Previously, Aayush has starred in the 2018 film Loveyatri, which was also produced by Salman. His upcoming projects include Kwatha, where he will star alongside Isabelle Kaif, actor Katrina Kaif’s sister.

For Salman, Antim comes after Radhe, which released earlier this year in theatres as well as on pay-per-view. His upcoming films include Tiger 3, which is currently been shot in Turkey. Kick 2 and Kabhi Eid Kabhi Diwali have also been announced. According to the reports, he will also have cameo appearances in Aamir Khan’s Laal Singh Chaddha and Shah Rukh Khan’s Pathan.

Presented by Salman Khan Films, Antim: The Final Truth has been directed by Mahesh Manjrekar.