Actress Kangana Ranaut who is set to don the cap of a producer with her next project Tiku Weds Sheru shared the first glimpse of the main characters. Kangana treated fans with Nawazuddin Siddiqui and Avneet Kaur’s first look posters from the film. She informed about the commencement of the shooting also. 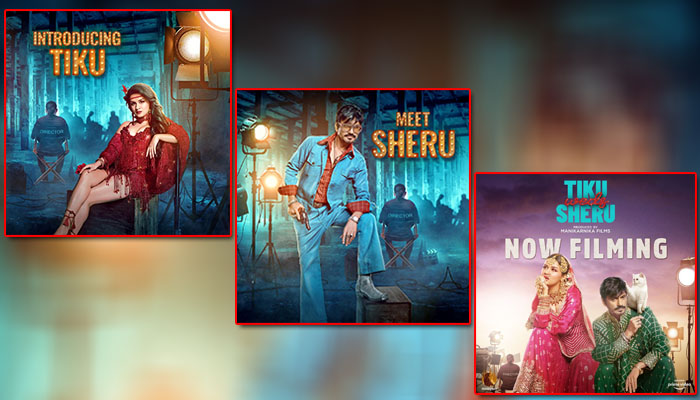 Kangana shared the Nawazuddin’s first look poster and revealed that he will be seen playing the role of Shiraz Khan Afghani urf Sheru while Avneet will be seen essaying the character of Tasleem Khan urf Tiku. Apart from bankrolling it, this will be her first project under her production house Manikarnika Films. Nawazuddin who has played, many iconic roles on the silver screen, seems to be playing a gangster in the next as he is seen holding a gun in his hand while posing.

He is seen wearing a denim shirt and pants along with a red shirt inside. The backdrop of the poster seems to depict a shooting set with lights, a camera all around, and a person sitting on the director’s seat. While captioning the poster, Kangana wrote, “हम जब मिलते हैं, तो दिल से मिलते हैं, वरना ख़्वाबों में भी मुश्किल से मिलते हैं (When I meet, it is always with great love, else it is difficult to even meet me in dreams). Meet Shiraz Khan Afghani urf Sheru.”

On the other hand, Avneet can be seen playing an actress in the film as she is seen dressed in a beautiful sparkling dress while sitting on a shooting set. While captioning the post, Kangana wrote, “चलो तो चाँद तक , नहीं तो शाम तक .Meet Tasleem Khan urf tiku.” Apart from this, the Queen actor also shared another poster that showed the two stars posing and it read, “Filming begins.”

In the caption, Kangana shared her excitement of beginning the new journey on the day she received Padma Shri honour She expressed her joy of starting a new journey as a producer and how this film will always be special for her.” It seems that the film will release digitally as the actor tagged Amazon Prime Video in the post. She even expressed her excitement to meet her fans in theatres with her upcoming films.