After recently announcing the new date of the theatrical release, the makers of Kangana Ranaut starrer Thalaivii have shared the teaser of the first romantic song from the film, ‘Teri Aankhon Mein’, song out on Monday. The teaser offers glimpses into the romantic track, tracing the on-screen chemistry of the cinematic legends, Jayalalithaa and MGR, along with throwing light on their lesser-known real-life relationship. 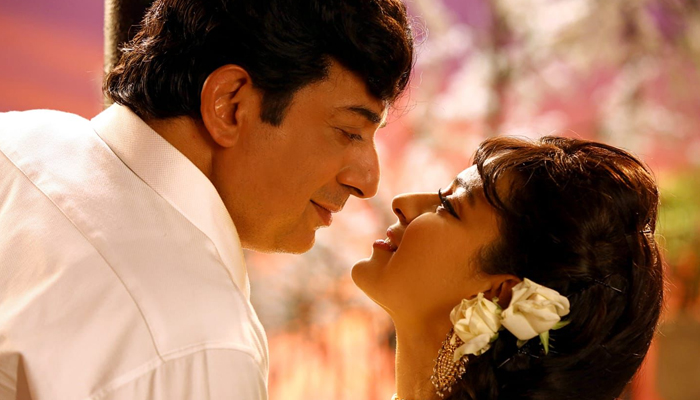 Slipping into the characters of Jayalalithaa and MGR, Kangana Ranaut and Arvind Swamy bring alive the iconic and much loved pairing of South Indian Industry’s biggest superstars. Unraveling the untold relationship between Jayalalithaa and MGR as her mentor, protector and lover, the song highlights the years of cinematic glory of the two legends.

Earlier, the trailer of the film offered insights into the relationship between the two, along with tracing the inspiring journey of the strong, powerful icon Jayalalithaa. Touching upon the varied aspects of Jayalalithaa’s life, Thalaivii presents her journey as an actress, from a young age to emerging as the Face of Tamil Cinema along with progressing towards the later phase of her life showcasing the rise of the revolutionary leader that shaped the course of Tamil Nadu Politics.

Scaling over 30 years of journey, Thalaivii presents Kangana Ranaut aptly portraying the different looks of Jayalalithaa throughout her life, in a gripping story that reflects the untold reality, backed by impactful performances and entertaining music. The makers had earlier revealed, releasing ‘Thalaivii’ in theaters is the perfect ode to Jayalalithaa, as she belonged to the silver screen.

Thalaivii, presented by Vibri Motion pictures, Karma Media Entertainment and Zee Studios in association with Gothic Entertainment and Sprint films has been produced by Vishnu Vardhan Induri and Shailesh R Singh and Co produced by Hitesh Thakkar and Thirumal Reddy with Brinda Prasad as the Creative Producer. Thalaivii is set to release in theatres worldwide in Hindi, Tamil and Telegu by Zee Studios on 10th September, 2021.