The first look poster of Thalaivi – the biopic of former Tamil Nadu chief minister J Jayalalithaa is out now. She was called ‘Amma’ by her fans and enjoyed a very illustrious life while she had it. The film stars Kangana Ranaut, who looks unrecognisable as the political leader. 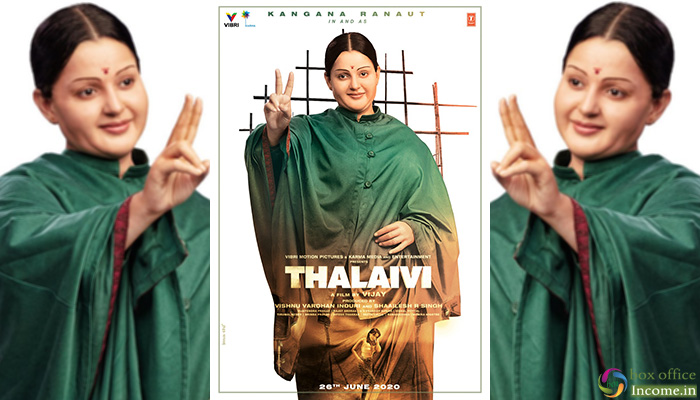 Karma Media And Entertainment shared the poster on Twitter on Saturday afternoon was accompanied with the caption, “The legend we know, but the story that is yet to be told! Presenting #KanganaRanaut, in & as #Thalaivi. A film by #Vijay, arriving in cinemas on 26th June, 2020”.

The poster shows Kangana with thick prosthetic makeup on her face, perfecting Jayalalithaa’s ‘victory sign’ and soft smile, She is seen in a green saree with a green jacket on top. A smaller, inset picture shows Kangana as a younger Jayalalithaa, when she used to be a film actor. The film is will release in Hindi, Tamil and Telugu languages.

Kangana Ranaut was last seen in Judgementall Hai Kya & her performance was welcomed with open arms by the critics as well as the audience. Though that movie didn’t work well at the box office, her movie before that Manikarnika: The Queen Of Jhansi did well for itself despite being mounted on a high budget.

Hollywood-based prosthetics expert Jason Collins, renowned for films such as Captain Marvel and Blade Runner 2049, is working on Kangana’s look. It is being directed by A L Vijay. Apart from Kangana, only Arvind Swami’s name has been confirmed in the cast. The film is scheduled to release in 2020.