The makers have launched the first look poster of Super 30 and what we notice is, Vikas Bahl gets the directorial credit. It was just yesterday (June 1) when the announcement was made that filmmaker Vikas Bahl has been given a clean chit in the sexual misconduct case. 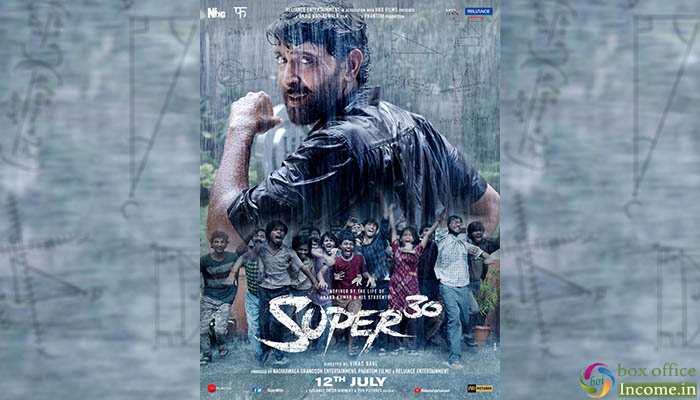 Hrithik took to his Twitter account on Sunday to make the big announcement. The actor also unveiled a new poster of the film that shows his character, Anand Kumar, getting drenched in rain. “Haqdaar bano! #Super30Trailer coming on June 4,” he wrote in his tweet.

The poster has definitely got all the Hrithik fans excited with the rough yet engrossing look of the actor. Reprising the role of a Mathematician, Anand Kumar who trains students for IIT-JEE in Bihar, the actor would be essaying the role of a teacher in this biographical next.

Super 30 was initially slated for January 26 this year but was postponed to July 26 largely due to charges against Bahl. Its release date was shifted again, this time to avoid a clash with the Kangana Ranaut and Rajkummar Rao-starrer Mental Hai Kya.

The decision was taken following Kangana’s sister Rangoli Chandel’s allegations that the team Super 30 was running a negative PR campaign against Mental Hai Kya. Hrithik, in a tweet, had mentioned that he had decided to move to a new release date to save himself from “personal trauma and toxic mental violence.”

The movie is co-produced by Sajid Nadiadwala under his production house Nadiadwala Grandson Entertainment and Reliance Entertainment. The film will hit the screens on July 12.