The makers of Akshay Kumar and Katrina Kaif’s ‘Sooryavanshi’ released the trailer of the film on Monday and the power-packed performances will surely set the big screen on fire. Ajay Devgn and Ranveer Singh also reprise their roles of Singham and Simmba from the franchise’s previous films. 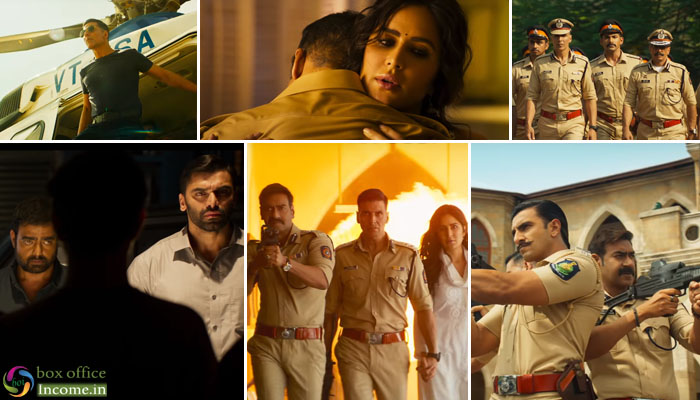 The trailer begins with a reference to the tragic terrorist attacks that Mumbai has faced including the 1993 blast, 2002 bus blast, 2006 Blasts and the most tragic of all 26/11. All this is building to one more attack with Akshay Kumar as Veer Sooryavanshi coming in and slaying it all.

The trailer gives us an Akshay Kumar throwing subtle punch lines and punching the bad men hard. With flying cars, intriguing action and some whistle worthy dialogues, we also meet Katrina Kaif, Ranveer Singh and Ajay Devgn in the pretty long trailer. In the trailer of Sooryavanshi apart from the title track we don’t get to hear any other songs.

But we are sure fans of Akshay and Katrina are eagerly waiting for the recreated version of ‘Tip Tip Barsa Paani’. Directed by none other than Rohit Shetty, the trailer is a complete masala entertainer. Sooryavanshi was earlier slated to release on 27th March 2020, but it has been preponed to 24th March 2020.