The most-awaited trailer of year ‘Section 375’ starring Akshaye Khanna (Criminal lawyer Tarun Saluja) and Richa Chadha (Public prosecutor Hiral Mehta) is out now. Directed by Ajay Bahl, the film explores the subject of rape in India and the legal and social tussle it follows! 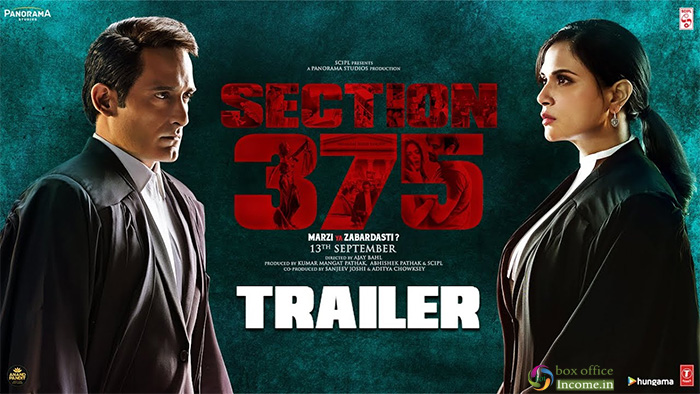 The trailer begins with a rape victim taking her complain to the cops. The 2:46-minute long clip then follows the court proceedings of the case. In a particularly interesting stand-off between the two lawyers, things seem to be taking an intense turn.

Richa Chadha who is seen representing the rape victim drops some serious truth-bombs while quoting the law against Akshay Khanna’s defendant who grills the accused to find the truth. And we are now surer than we were before that they have caught on to their characters very well.

The trailer ends with Akshaye Khanna says the lines, “This case is a classic example of a woman, using as a weapon, the very law that was made to protect her.” The truth is always questioned and one has to find in this case when the film releases. The film also features Meera Chopra & Rahul Bhat and is all set to release on September 13, 2019.

The film is produced by Bhushan Kumar, Krishan Kumar, Kumar Mangat Pathak, and Abhishek Pathak, and co-produced by Aditya Choksi, and Sanjeev Joshi, while, the story, screenplay, and dialogue are by Manish Gupta, who has previously written and directed The Stoneman Murders (2009) and Rahasya (2015). Ajay Bahl directed the cult film BA Pass (2012), in which a young man is pushed into prostitution by his lover.