Actor Prabhas is all set to treat his fans once again with his upcoming actioner, ‘Saaho’. The film is a multilingual film. Prabhas’ upcoming next is being shot in Telugu and Hindi while reportedly it will be dubbed in Tamil and Malayalam languages. 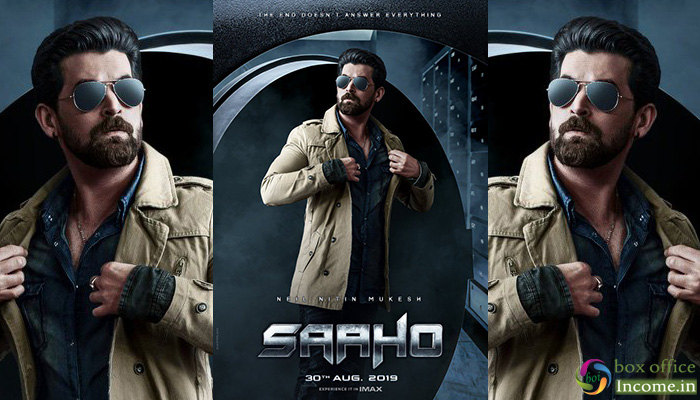 Meanwhile, after the last romantic number Enni Soni featuring Shraddha Kapoor and Prabhas, they have now released the character poster of Neil Nitin Mukesh. According to reports, Neil will be seen essaying a negative character in the film. Apart from him, Mandira Bedi will also be seen in a villain role.

Neil Nitin Mukesh today took to his social media handles to unveil his character poster from the film. The post was shared by T-Series in which it read, “Swooning the audience with his mysterious look; here comes our first character poster ft. @NeilNMukesh in a dashing avatar!😎

The actor, who will be seen essaying the role of ‘Jai’ in the film, looks all sauve in the introductory poster of the film. Dressed in black shirt, pant and beige jacket, Neil looks dapper as ever. His magnetic personality and cool shades compliments his overall look.

With Saaho, actress Shraddha Kapoor makes her debut in down South. The film also features Evelyn Sharma and Neil Nitin Mukesh. The film is directed by Sujeeth and made under the banner of UV Creations, T-Series and Dharma Productions. The wait is over as the excitement is building day by day to catch the duo in action. The movie Saaho is slated to release on 30th August 2019.