March 15th is the day when SS Rajamouli and his RRR team decided to bring out Alia Bhatt’s much awaited character— Sita’s look out and we are all mesmerised. The look has been released on actress’s birthday and people can’t get enough of her new avatar. Earlier, a peak was given into her look to build up the curiosity around and truly, everyone was waiting for the first unveil. 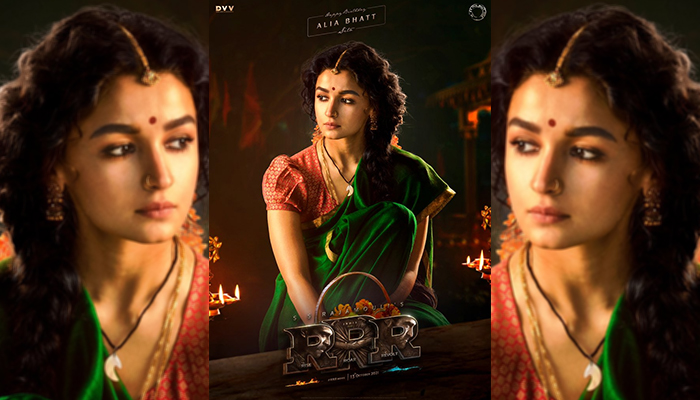 With a small bindi and a moon like shaped locket, Alia’s Sita in a red and green saree looks like she was meant to play the part. With diyas in the background and hope in her eyes Alia waits for her Ramaraju. Fans have been hailing the new look new avatar taken on by the young superstar.

Sita‘s look unveil was preceded by a teasing poster, in what looks like a buildup in momentum for the hype for the character’s look unveil. Alia looks to be in a red and green saree paired with payal and green bangles sitting in an iconic pose in front of a idol of lord and it leaves the fans speechless as she takes on a never seem before avatar in her career.

The hype around the movie has been surreal right from the get go. Be it a motion poster launch, a character reveal or any movie related event the fans have found themselves in wonderment over the cinema spectacle that RRR promises to be.

‘RRR’ has an ensemble cast from multiple industries and boasts of names like Ajay Devgn, Alia Bhatt alongside Ram Charan and NTR Jr. The project is helmed by SS Rajamouli, who was also the mastermind behind the record breaking Baahubali series. The cinematic spectacle promises to be a record breaker and huge blockbuster in the making.