The makers of Roohi just released the trailer of the film starring Janhvi Kapoor, Rajkummar Rao and Varun Sharma. Directed by Hardik Mehta, the film is produced by Maddock films who gave a hit, Stree back in 2018 and we can’t wait to take a thrilling yet scary ride with this one. 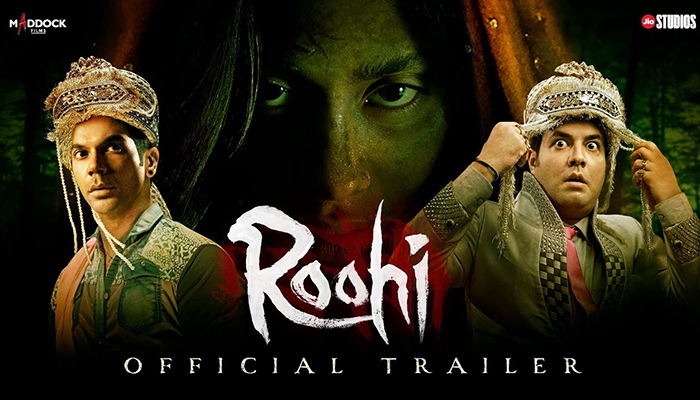 The trailer has just released and we are already loving the performances by Janhvi, Rajkummar and Varun. Roohi is one of the most awaited films of this year. The plot of the story revolves around a witch Roohi (Janhvi Kapoor) who abducts brides on their honeymoon. Veer (Rajkummar Rao) and Raj (Varun Sharma) take responsibility to save the village and brides from getting abducted in the story.

Janhvi looks really promising in the trailer with her 360-degree neck turn and Rajkummar and Varun’s friendship was the takeaway from the trailer. The VFX looks full-on in the trailer and we can’t wait to witness this horror ride with Janhvi Kapoor, Rajkummar Rao and Varun Sharma.

Meanwhile, After the massive success of Stree (2018), the team reunites to further build the cinematic universe in the family-friendly horror-comedy franchise with the much-anticipated Roohi. The incredibly talented Rao is back with the Dostana actress in a spectacular role and audience favourite Varun Choocha Sharma.

Backing a new director as they have in the past, Roohi is directed by Hardik Mehta and written by Mrigdeep Singh Lamba, and the makers of Roohi hope to pave the way for films slated for a theatrical release with the first major 1,500 screen plus pan-India release this year.