The makers of KGF: Chapter 2 have released the first look of actress Raveena Tandon on her birthday. The announcement took everyone by surprise as it wasn’t announced anywhere before. Raveena will be seen playing Ramika Sen in the film and her look from the poster looks absolutely fierce. Here’s a look: 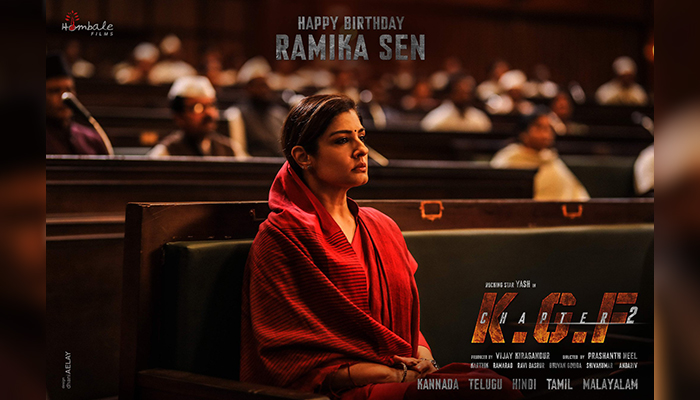 Starring Yash in the centre of it all, KGF that release in 2018 became one of the biggest hits of the year and left fans asking for more. The chapter 2, alongside Raveena and Yash, stars Sanjay Dutt as the antagonist as well. The makers have now lifted the excitement level a notch higher by sharing Tandon’s first look as Ramika Sen.

Introducing her character on Twitter on Monday, she wrote, “THE gavel to brutality!!! Presenting #RamikaSen from #KGFChapter2. Thanks KGF team for the gift.” She is seen with moist eyes, wearing a maroon sari, seated on a bench with authority and power. KGF follows Rocky (Yash), who rises from poverty to become the king of a gold mine.

The team has been treating fans to the looks of the characters from time to time. Sanjay Dutt’s look as Adheera in the film too generated massive buzz. Makers of the film had also shared a new still of actress Srinidhi Shetty on her birthday. The team has already resumed shooting and the next schedule in Hyderabad will see Sanjay also join the team.

Raveena, one of the top Bollywood actors of the 90’s, is best known for her films Mohra, Andaz Apna Apna, Laadla, Dulhe Raja, Shool, Aks, Daman, Satta and Maatr. KGF 2 is set to hit the big screen in 2021.