One of India’s highly awaited mega pan-India films, Pushpa, headlined by Icon Staar Allu Arjun has resumed its shooting in full swing. Produced by Naveen Yerneni and Y. Ravi Shankar of Mythri Movie Makers, Pushpa is back on the floors and shall run into a 30-day long schedule in Hyderabad. 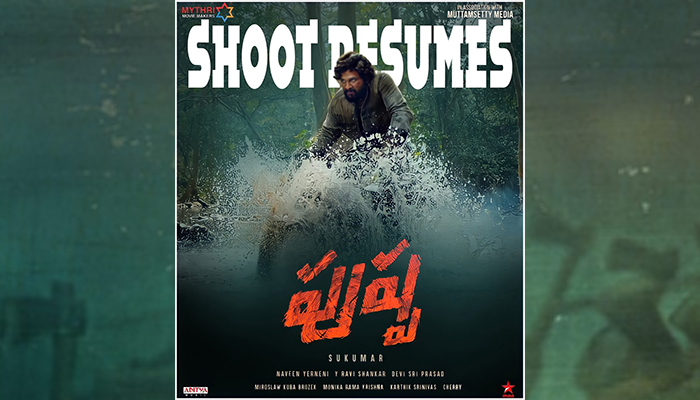 The film’s team has established a standard safety procedure to ensure that precautions are observed while the shooting continues. The Allu Arjun-starrer has injected the much-needed confidence into the world of cinema by kicking off its schedule and given cinemagoers something to look forward to. Given the popularity of the film’s first look, ‘Introduction to Pushpa Raj’, the anticipation around it has grown and fans of the Icon Staar eagerly await its release.

Producers Naveen Yerneni and Y. Ravi Shankar of Mythri Movie Makers jointly say, “Pushpa is an action-packed story that has moments that tug at the heart, and filming it has been a joyride. We’re very happy to restart the shooting and we hope to wrap it up in time to present it to the audience. We witnessed incredible excitement for ‘Introduction To Pushpa Raj’ and so we aim to surpass the expectations that have been created. We would love to meet the viewers in cinemas soon through Pushpa.”

Pushpa revolves around the red sanders heist in the hills of Andhra Pradesh. With this film, the audience shall see Allu Arjun and Rashmika Mandanna, sharing the screen space for the first time. The two-part movie is set in the backdrop of red sandalwood smuggling. It will chronicle the story of Pushparaj (Allu Arjun) and his association with smuggling.

Devi Sri Prasad is the music director and Miroslaw Kuba Brozek of Nani’s Gang Leader fame is the cinematographer for this actioner. After completing the shoot of Pushpa part 1, Allu Arjun is expected to collaborate with director Sriram Venu for Icon.