The trailer of Hungama 2 was released earlier today. The film directed by Priyadarshan will see the lead stars entangled in a web of confusing relationships and situations which lead to hilarious outcomes. The film stars Paresh Rawal, Shilpa Shetty, Pranitha Subhash, and Meezaan Jafri and is set to release on Disney+Hotstar on July 16. 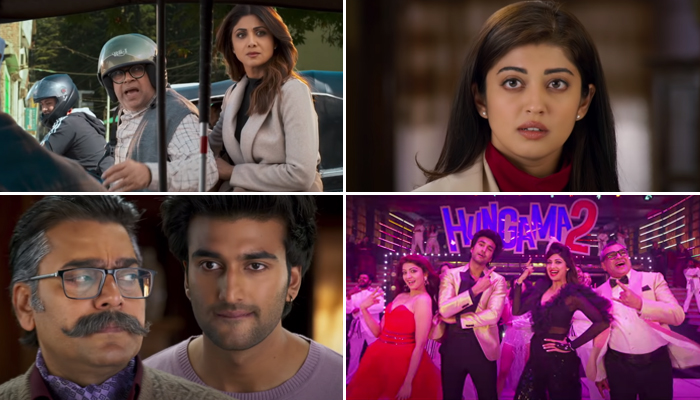 The film’s plot revolves around Meezaan’s character trying to disprove that he’s the father of his college sweetheart’s baby. The trailer also includes a remixed version of the classic 1990s song Chura Ke Dil Mera Goriya Chali, which was first included in the film Main Khiladi Tu Anari and starred Shilpa Shetty and Akshay Kumar. Shilpa is also featured in the updated version.

The trailer was launched by Akshay Kumar, who previously worked with Paresh Rawal and Priyadarshan in the cult comedy Hera Pheri. Hungama 2 is also Shilpa Shetty’s acting comeback after a decade away from the big screen.

The film is a sequel to the 2003 Hindi language film Hungama which was also directed by Priyadarshan. Apart from retaining the title for the sequel, another commonality between the two films is that both are a remake of Malayalam films. While Hungama was a remake of the 1984 film Poochakkoru Mookuthi starring Mohanlal, Hungama 2 is a remake of Minnaram also starring Mohanlal in the lead. Minnaram which was released in 1994 was directed by Priyadarshan and also starred Shobhana, Jagathy Sreekumar, and Thilakan.