Prabhas is on a signing spree. The rumours about director Prashanth Neel of KGF fame directing the actor in his next movie have come true. The announcement of the same was made on Wednesday. The film is titled Salaar and it will be bankrolled by Vijay Kiragandur of Hombale Films. 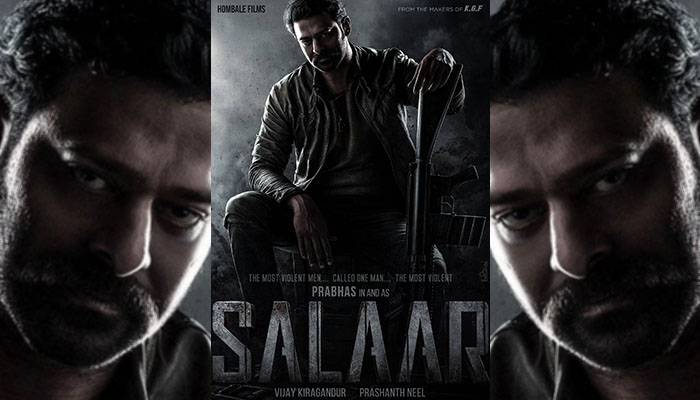 The first look poster features Prabhas in an intense get-up. It seems his character has a taste for guns and violence. The tagline of Salaar reads, “The most violent men..called one man..the most violent!” Even director Prashanth Neel has promised that Salaar will show the Baahubali star in a “never-seen-before” avatar.

“I’ve always wanted to work with Hombale Films and having Prashanth Neel as the director for our film, I don’t think there can be a better and more exciting opportunity for me as an actor. This is a very exciting film and my character is extremely violent, so this is something I haven’t really done before. It’s a pan-Indian film and I can’t wait to be on the sets already,” said Prabhas talking about the film, which is touted as his debut in Sandalwood.

“I’m extremely thrilled to join hands with Vijay Kiragandur and our very talented Prabhas. We were in talks for quite some time about the project, and it’s finally happening. We are all geared up to present one of a kind actioner to our audiences. They are definitely going to see Prabhas in a never seen before avatar, which I am confident that his fans will love,” said Prashanth.

The makers of Salaar, however, did not reveal details regarding the remaining cast and crew of the movie. Prashanth Neel made his mark in the Kannada film industry with his debut movie Ugramm. The 2014 gangster drama showed the director’s keen sense of style and his ability to effectively use slow-motion shots to portray heroism. And he became a force to reckon with following the release of KGF: Chapter 1.

The two-part mob drama became a huge hit in Karnataka and opened up new markets in other parts of the country. He has further scaled up the production of KGF 2 by roping in more A-listers from Bollywood, including Sanjay Dutt and Raveena Tandon to make the sequel more appealing to the audience in the Hindi heartland.

On the other hand, Prabhas has a slew of other big-budget movies in the pipeline. He is currently busy shooting for director Radhe Krishna Kumar’s romantic film Radhe Shyam. And he has also signed the mythological drama Adipurush, which will be directed by Om Raut of Tanhaji fame. He also has a film with director Nag Ashwin of Mahanati fame in his kitty. Billed as a science-fiction drama, the movie also stars Deepika Padukone.