As the cast of ‘Phone Bhoot’, Katrina Kaif, Ishaan, and Siddhant Chaturvedi have been furiously running places for the promotion of the film, their journey recently took them to IIT Bombay where they shared a lot of fun with the students. From dancing to interacting with the students, to discussing the startup idea, the team totally owned the stage with their presence. 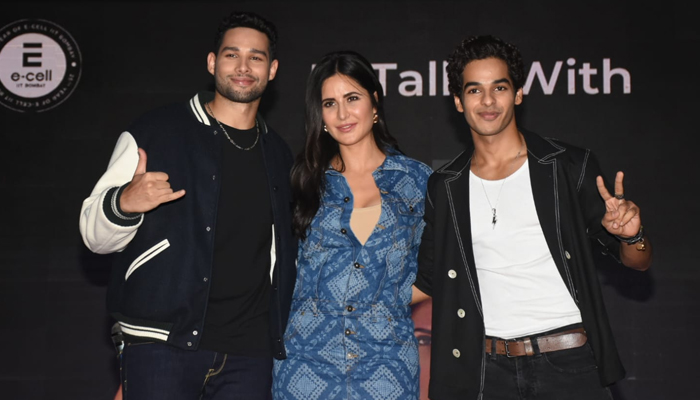 Amid a constant spree of promotion, the cast of Phone Bhoot captured the ambiance at IIT Bombay on their visit. The students were truly thrilled to have the world’s most beautiful ghost Katrina Kaif and the two ghostbusters Ishaan, and Siddhant from the film on the stage.

While the cast had a fun interaction with the students, they also danced to the ‘Kaali Teri Gutt’ song from the film. Apart from this, the cast also shared their entrepreneurship idea and how they also run a startup in the film that focuses on helping the ghosts from the bhoot world.

Moreover, while the crowd was shouting ‘How is the josh’, the cast was seen teasing Katrina with the name of her husband, Vicky Kaushal.

Directed by Gurmmeet Singh and written by Ravi Shankaran and Jasvinder Singh Bath, ‘Phone Bhoot’ is produced by Excel Entertainment, headed by Ritesh Sidhwani and Farhan Akhtar. The film is all set to be released on 4th November 2022.