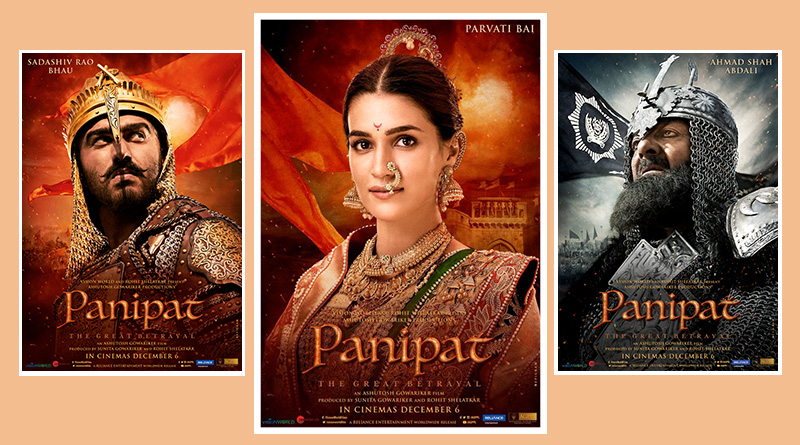 Arjun Kapoor as Sadashiv Rao Bhau is dressed as a Maratha warrior and looks the part. A fiery war in the background adds to his character and a sunlit face with proud expression are only increasing the excitement. The poster is reminiscing to that of Ranveer Singh’s look from Bajirao Mastani.

The veteran actor Sanjay Dutt plays Ahmad Shah Abdali and is fierce and ferocious in the poster as a Mughal warrior. All covered in armour the actor can be seen rocking the kohl eyes and looking dreadful in a full-grown beard. The dark clouds on the battlefield in his background are a reference to his grey character that we will get to see in the film.

Kriti Sanon in a never seen before avatar steps in the shoes of Parvati Bai and looks radiant and beautiful in the Maharashtrian attire. The poster features the fort in the background whose Parvati was the queen of. Kriti is certainly giving us a dejavu of Priyanka Chopra Jonas’ Kashibai from Bajirao Mastani.

The film is based on the third battle of Panipat, which was fought between the northern expeditionary force of the Maratha Empire and the invading forces of the King of Afghanistan, Durrani. He had two Indian allies – the Rohilla Afghans of the Doab and Shuja-ud-Daula, the Nawab of Awadh.

The event is significant in modern Indian history as it halted the march of the Maratha empire, eventually leading to the rise of the British in India. The film is set to hit the screens on December 6.