After keeping the audience waiting for a long time, the makers of the upcoming comedy drama ‘Pagalpanti’ have revealed the character posters of the cast. The film is a laugh riot and features John Abraham in the lead role, who will be making a comeback in the comedy genre after his successful streak with thriller films. 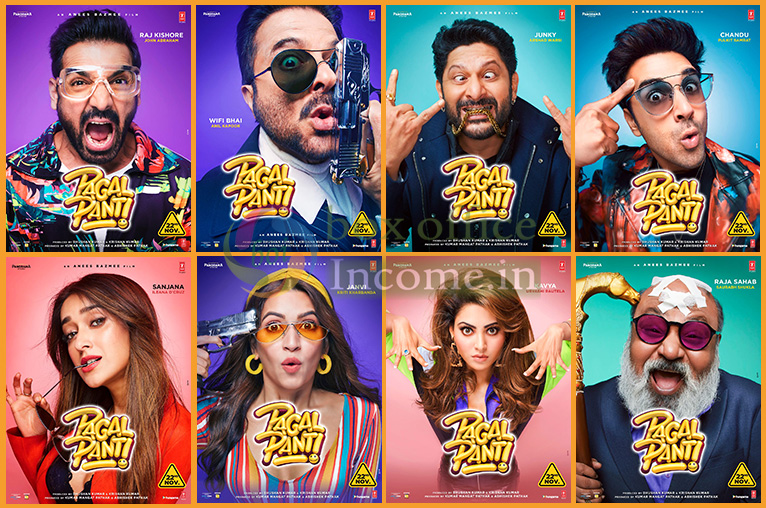 Directed by Anees Bazmee, the film sees John as a down-on-luck commoner, Raj Kishore. While he flits from one job to the other, his ladylove Sanjana (played by Ileana), is constantly landing in trouble because of her beau’s bad luck.

After making Manju Bhai popular, Anil Kapoor will return as Wifi Bhai in Pagalpanti. He can be seen holding a gun in the poster, hinting that he might yet again essay the role of a don. Arshad Warsi too looks crazy in the poster. His character is named Junky.

Coming to the ladies, Ileana returns back as Sanjana in this film. In the poster, Ileana donns a red suit and looks quite hot in it. Kriti brings back the 90’s vibe with her poster. She can be seen dressed in retro clothes and will essay the role of Janvi in Pagalpanti. The ghost of Grand Masti, Urvashi Rautela, returns as Kavya in Anees Bazmee’s film.

Earlier, to kickstart the promotions of the film, the team of Pagalpanti had shared warning poster that said “Dimaag Mat Lagana, Kyun Ki Inmein Hai Nahin.” The actors captioned the posts as, Pagalpanti starts now. The film is extensively shot in London and is all set to release on 22nd November this year.