Pooja Hegde turned 30 on Tuesday and on the special occasion, the makers of her forthcoming film Radhe Shyam, co-starring Prabhas, unveiled her first look from the movie. On 13 October 2020, Pan-India star Prabhas introduced his ‘Prerana’ (Pooja’s character name) to the world. 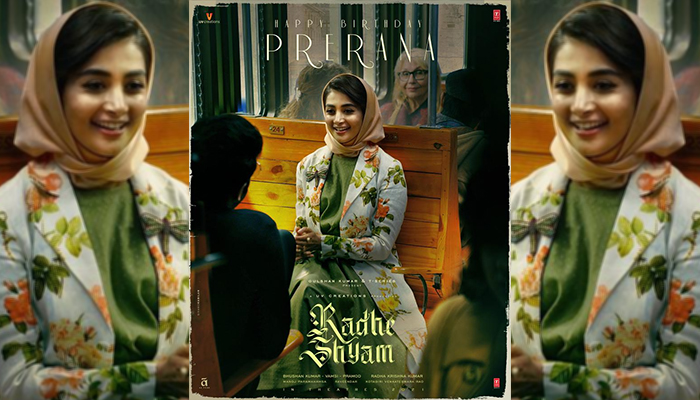 The makers have wished Pooja Hedge through this Radhe Shyam poster. The text on it reads, “Happy Birthday Prerana”. The new poster was shared by Prabhas on his Instagram page. The Bahubali actor wrote, “Wishing our Prerana @hegdepooja, a very Happy Birthday!”.

In the brand new poster of the film, the actress can be seen sporting a retro look. She looks gorgeous in a green dress, which she paired with a printed long jacket and a head scarf, while travelling in a train. Also, the actress is sitting on a wooden seat talking to a guy who looks like Prabhas from behind.

Radhe Shyam will be trilingual film and is helmed by Radha Krishna Kumar. It is presented by Gulshan Kumar and T-Series and produced by UV Creations. Radhe Shyam, which will also feature Murli Sharma, Sachin Khedekar, Priyadarshi, Sasha Chettri, Kunaal Roy Kapur and Sathyan, is expected to release next year.

Pooja Hegde made her acting debut with a 2012 Tamil film Mugamoodi. She later joined Bollywood with Ashutosh Gowariker’s Mohenjo Daro, in which she co-starred with Hrithik Roshan. She has also worked in films such as Duvvada Jagannadham, Housefull 4, Saakshyam, Maharshi and Ala Vaikunthapurramuloo, which released earlier this year.