The sequel to the 2014 film Mardaani and features Rani Mukerji, Mardaani 2 has made a right buzz among the audience and received positive reviews from the critics. After an excellent opening weekend, it is heading strongly at the box office on weekdays also. 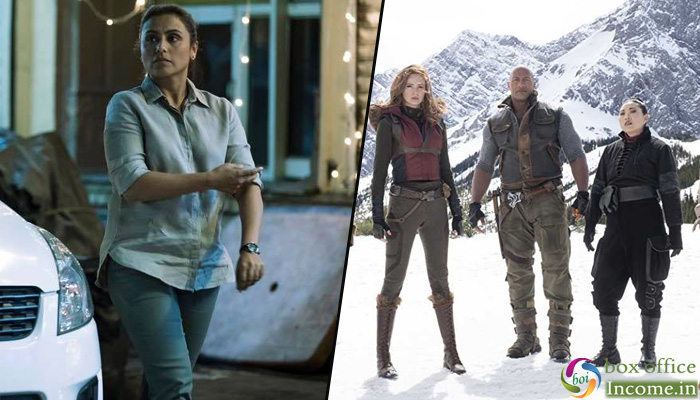 Directed by the Gopi Puthran, the female-oriented Hindi action thriller has impressed everyone with its strong content and brilliant performance given by the leading actress. As a result, it picked up very well over the weekend and did the business of 18.15 crores which included 3.80 crores on Friday, 6.55 crores on Saturday & 7.80 crores on Sunday.

On the crucial Monday, Mardaani 2 maintained a solid pace despite a drop and minted the amount of 2.85 crores. Then on Tuesday, it remained rock-solid and bagged 2.65 crores. On the next day i.e. Wednesday, Rani Mukerji starrer managed to collect 2.25 crores and raised 6 days total domestic collection to 25.90 crores nett at the domestic box office.

In parallel, the hugely-awaited Jumanji: The Next Level has got succeed to hit the target right among the Indian audience despite getting mixed reactions from the critics. In the opening weekend, it raked the business of 24.45 crores with 1.15 crores from Thursday previews, 5.05 crores on Friday, 8.35 crores on Saturday & 10.10 crores on Sunday.

On weekdays, as usual, Sony Pictures’ presentation witnessed a significant drop and garnered the business of 3.01 crores on Monday & 2.70 crores on Tuesday. On Wednesday, with a further decline, Jumanji: The Next Level minted 2.55 crores and raised 6 days total collection to 32.71 crores at the Indian box office.