Despite a decent start & having a biggie Jumanji: The Next Level in its opposite, recently released Hindi cop drama Mardaani 2 passed its opening weekend on a good note and running steadily on weekdays as well. With its strong content, the film has impressed everyone and getting a superb response in metro cities. 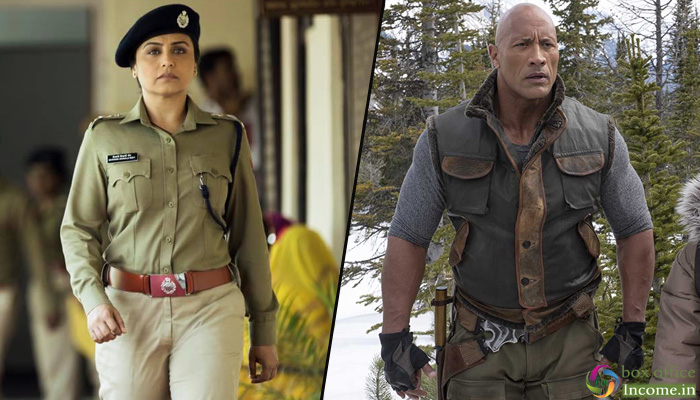 Directed by Gopi Puthran, the female-oriented Hindi action thriller Mardaani 2 has received mostly positive reviews from critics and gathered a good word of mouth. As a result, it had raked the business of 18.15 crores in the weekend that included 3.80 crores on Friday, 6.55 crores on Saturday & 7.80 crores on Sunday.

On weekdays, as usual, Red Chillies Entertainment & Azure Entertainment’s presentation Mardaani 2 recorded a drop and minted 2.85 crores on Monday & 2.65 crores on Tuesday. After 5 days, its total collection has become 23.65 crores nett at the domestic box office.

In parallel, the hugely awaited Jumanji: The Next Level has got positive reactions from the critics and got succeed to create the right buzz among the Indian audience. In the opening weekend, it raked the business of 24.45 crores which included 1.15 crore from Thursday previews, 5.05 crores on Friday, 8.35 crores on Saturday & 10.10 crores on Sunday.

On weekdays, Sony Pictures’ presentation witnessed a significant drop but still managed to remain good and bagged the amount of 3.01 crores on Monday & 2.80 crores on Tuesday. After 5 days, the total collection of Jumanji 2 has become 30.26 crores nett in India including all versions.