After the good opening week, the Hindi action drama Mardaani 2 got affected by the new release Dabangg 3 and passed its second weekend at an ordinary note. Backed by the successful franchise, it was expected to perform better at the box office. 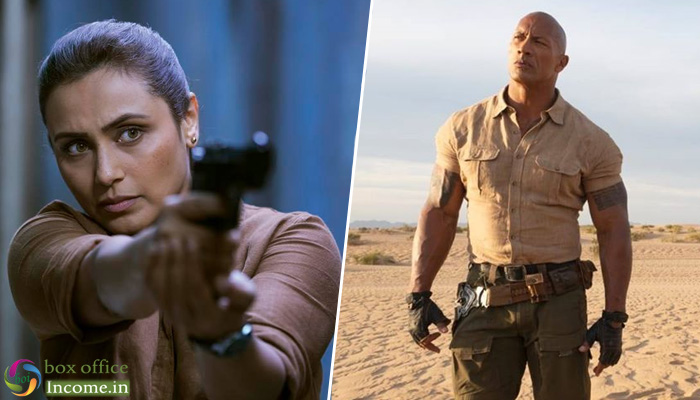 Starring Rani Mukerji, Mardaani 2 has got succeed to impress everyone with its strong content and of course, the brilliant performance by the leading actress. From the critics as well, it has received positive reactions and did the business of 28.05 crores in the first week with 23.20 crores in the weekend and 18.15 crores on weekdays.

On its 2nd Friday, Yash Raj Films’ production showed normal drop and minted 1.15 crores. Over the weekend, once again it took a healthy jump and bagged the amount of 1.95 crores on 2nd Saturday & 2.55 crores on 2nd Sunday. After 10 days, the total domestic collection of Mardaani 2 has become 33.70 crores nett.

In parallel, the highly-awaited Hollywood film Jumanji: The Next Level has also received positive reactions from the critics and made the right buzz among the Indian audience. In the opening week, it raked the business of 35.21 crores which included 24.45 crores in the weekend and 10.76 crores on weekdays.

On 2nd Friday, after a minimal drop, Sony Pictures’ presentation minted the amount of 1.20 crores. Then over the weekend, it recorded a fair jump and garnered the business of 2.10 crores on 2nd Saturday & 2.70 crores on 2nd Sunday. After 10 days, the total collection of Jumanji 2 has become 41.21 crores nett from Indian screens.