As the country battles the COVID-19 pandemic, Bhushan Kumar’s T-Series has not only brought audiences music to uplift their spirits, during these troubled times, but also content that gives us some food for thought. After several successful films, the power producer now partners with writer-director Milap Milan Zaveri, to bring audiences another gem that talks about a united and safe India. 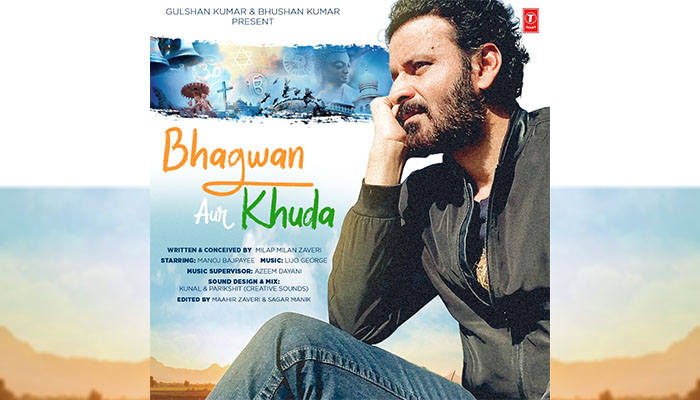 Titled ‘Bhagwan Aur Khuda’, this inspiring poem written and conceived by Milap Milan Zaveri is narrated by National award winning actor Manoj Bajpayee. Appreciation is sure to follow when some of the biggest names in the film industry came together for this collaboration.

Manoj Bajpayee’s fabulous rendition of the poem ‘Bhagwan Aur Khuda’ is widely being applauded and appreciated with massive love and support from the audience, trade and industry alike, several of whom took to various social media platforms, to voice their praise for this endeavor.

Said filmmaker Hansal Mehta, “This is a powerful message delivered straight from the heart by a man who must recite more and written with passion by a man who must write more.” Said National award winner Vidya Balan, “Whatta thought…I LOVE IT”. Echoed filmmaker Anubhav Sinha, “क्या बात।क्या बात। क्या बात।”

Said actor Sidharth Malhotra, “Super powerful thought. One world one humanity. Love this rendition.” Said filmmaker Anand Pandit, “This one truly hits home. What a conversation the team has brought to all of us!” Said Dia Mirza, “This is so powerful. We are one people.” Said Maneish Paul, “This is simply brilliant. What a thought.”

Says T-Series head honcho, Bhushan Kumar, “Milap Milan Zaveri is an outstanding writer and has penned some beautiful lines for this poem about humanity, which is the need of the hour. Manoj Bajpayee with his baritone and powerful voice, lends ‘Bhagwan Aur Khuda’ a lot of dignity and strength. We are overwhelmed with all the support and positive feedback the poem has received and we hope the underlying message of peace and love remain with audiences long after this.”

Says National award winner, Manoj Bajpayee, “The pen is greater than any weapon and that’s why poems and songs like ‘Bhagwan Aur Khuda’ are so important for the message they bring to audiences. This is a step in the direction of unity and brotherhood and I’m happy to be a part of it.”

Says director-writer, Milap Milan Zaveri, “I’m extremely thrilled with all the love and appreciation that ‘Bhagwan Aur Khuda’ has received. Religious harmony and brotherhood has always been an important message in all my films. This is another attempt to put that message out so that we can be a strong, united and safe India. When I penned this poem, the first person who came to mind was Manoj Bajpayee sir, who is an institution and one of the greatest Indian actors. Bhushan Kumar sir on the other hand, has always been a strong support through the course of my career. It’s been an honour to partner with Bhushan Kumar sir and Manoj Bajpayee sir on this.”