The much-awaited teaser of Dhamaka is finally out and the phenomenal act by Kartik Aaryan in it has left everyone asking for more. The actor has knocked it out of the park in film which is helmed by Ram Madhvani. Playing the intense news anchor Arjun Pathak, the short clipping shows his character’s anxiety to go live amidst a critical situation. But a TRP-hungry boss (played by the incredible Amruta Subhash), he’s forced to go live and get the show going. Just that short clipping, created an uproar on social media as his act left everyone spellbound. 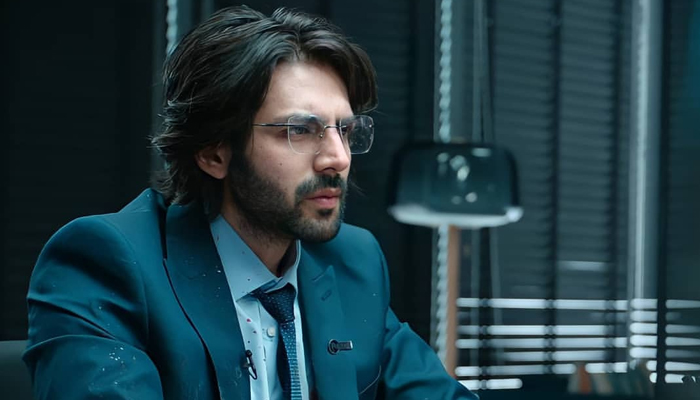 Kartik Aaryan who has always been masses’ hero and always wants to keep the audiences happy, was surprised that the netizens lapped up his angry young avatar. He’s surely gone out of his comfort zone and doing something totally different from all his previous films and his fans are in for some mind-blowing thriller drama.

As soon as the teaser went online, the hashtags #KartikAaryan and #Dhamaka were trending on Twitter for long number for hours. People were constantly tweeting about the hard-hitting teaser and how they were surprised by the power-packed act by this young actor. The actor’s timeline was flooded with compliments about him being exceptionally brilliant in it. Some even said that if this is the teaser, one can’t imagine what the film will be all about.

The teaser video was trending on No 1 in nationwide on the video-sharing platform. The actor is so ecstatic with the response, that he even shared a post to express his gratitude. He shared a sexy smiling picture of himself and captioned it saying, ‘Why so happy??? Swipe to find out.’ And the next click is a screenshot of the teaser trending on No 1 slot on Youtube. Audiences are mighty impressed by the teaser and Kartik’s performance has been a smash hit!

Dhamaka teaser has created a storm and showed the nation that this heartthrob means business at the movies. He might be your perfect boy next door, but when it comes to satisfying the inner artiste in him, he remains unstoppable and will leave your jaws dropped with amazement. Dhamaka will release this year on Netflix and the makers will soon announce its release date. Currently the actor is busy shooting for Bhool Bhulaiyaa 2 and then gets on to Dostana 2.