Kartik Aaryan has already stamped the hearts of millions of his fans across the globe with his handsome looks, charisma and talent; and now the young heartthrob will stamp your postal mails too. Yeah, Kartik, who is currently shooting for BR Films Pati Patni Aur Woh remake in Lucknow, now has his very own customized postal stamps that can be used to send letters around the world. 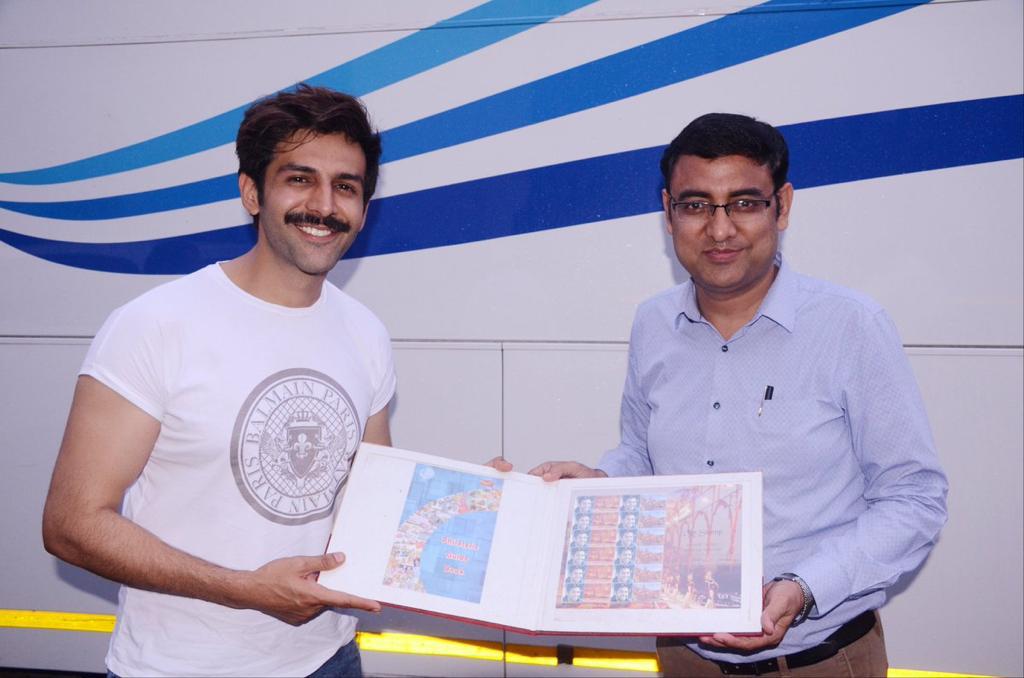 Kartik was filming for a major portion of the film at the Lucknow GPO, when the Director of Postal Services Lucknow HQ Region — Krishna Kumar Yadav, presented him with this unusual gift. Speaking about it, Krishna Kumar Yadav said, “We wanted to give Kartik something that he will always remember. We thought what could be more special than him being a part of the stamp collection. It’s a new initiative that we have taken.”

Further talking about Kartik’s reaction, he said, “When we shared the stamps with Kartik, he was very excited. He wanted to know how one would be able to use them. We told him that they could be used to write letters not only to people in India, but also abroad. He was really happy.”

No doubt, Kartik was thrilled and touched by this sweet gesture. He said, “I was surprised to see myself on the stamps. It’s such a thoughtful gesture. It feels great to receive so much love.” On the work front, Kartik Aaryan would next be seen sharing screen space with Bhumi Pednekar and Ananya Panday in Mudassar Aziz’s Pati Patni Aur Woh.

He also has Dostana 2 alongside Janhvi Kapoor and a to-be-launched fresh face. He is also rumoured to be playing the lead in a sequel to Akshay Kumar and Vidya Balan’s 2007 horror-comedy Bhool Bhulaiyaa. The actor will also be seen in the sequel of Love Aaj Kal with his rum0oured girlfriend Sara Ali Khan.