The much-awaited Hindi film of the year Kalank, unfortunately, has become the biggest disappointment at the box office. After a record-breaking start, it got failed to carry the pace forward and witnessed unexpected downtrend over the 5-days extended holiday weekend. Now on weekdays, due to a negative word of mouth, it is falling down rapidly. 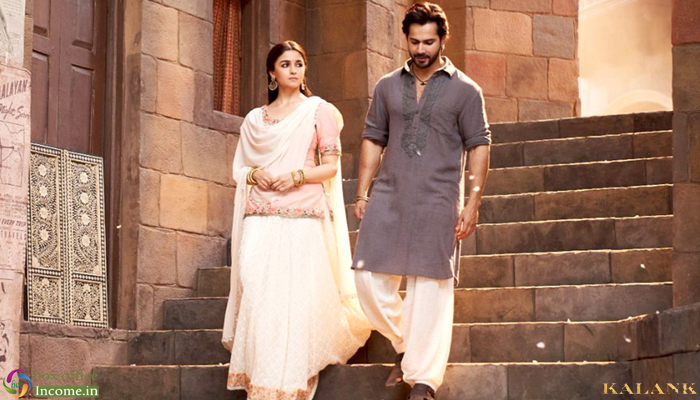 Starring Madhuri Dixit, Sonakshi Sinha, Alia Bhatt, Sanjay Dutt, Varun Dhawan & Aditya Roy Kapur in lead roles, Kalank was released amid the humongous buzz but got failed to live up to the expectations despite a solid star power. It received mostly unfavorable reviews from the critics as well as the audience due to its weak story-line.

Director Abhishek Varman’s period drama took a tremendous start on Wednesday and registered the biggest opening of the year in Bollywood with 21.60 crores. Afterward, it witnessed an abrupt drop in footfalls and minted the amount of 11.45 crores on Thursday, 11.60 crores on Friday, 9.75 crores on Saturday & 11.63 crores on Sunday.

After the 5-days weekend, the total collection of Kalank was recorded at 66.03 crores from 4000 screens nationwide. Now the film is running on weekdays and facing rejection from the audience.

On Monday, it faced more drop and did the business of 3.75 crores. Then on the next day i.e. Tuesday, with a further decline, Kalank minted 3.35 crores and raised 6 days total collection to 73.13 crores nett at the domestic box office.

The film turned out to be the biggest opener in overseas but slowed down a bit on Saturday and Sunday. Nevertheless, the movie still managed to pull a decent total of USD $ 4.83 Million (33.68 crores) over 5 days (Wednesday to Sunday).