Despite the huge pre-release buzz and no major competition from the new or existing Hindi films, Varun-Alia’s latest offering Kalank remained under-performed throughout the opening weekend. After the lower-than-expected but solid start, unfortunately, it got failed to pick up the desired pace at the box office. 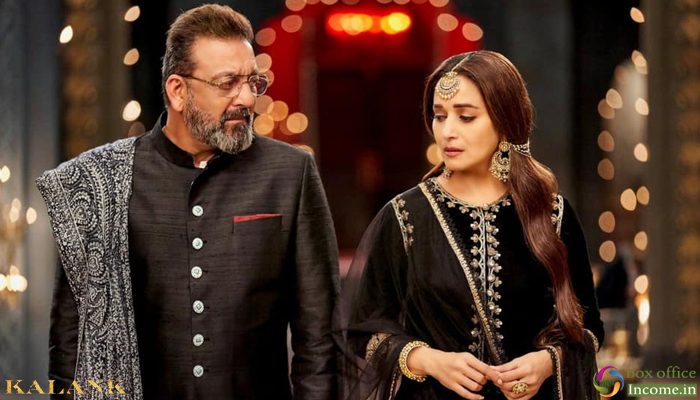 Directed by Abhishek Varman, Kalank has received mixed reviews from the critics as well as the audience due to its weak story-line. As a result, it has witnessed a continuous decrease in footfalls over the weekend after the biggest opening of the year in Bollywood.

On the opening day, Madhuri Dixit, Sonakshi Sinha, Alia Bhatt, Sanjay Dutt, Varun Dhawan & Aditya Roy Kapur starrer took an excellent start in the morning and registered the biggest opening of all time in Bollywood with 21.60 crores at the Indian box office.

After earning Rs 21.6 crore on its opening day, the film saw a drop in numbers on Day 2. On Thursday, Kalank raked the business of 11.45 crores, 11.60 crores on Friday (Good Friday) and 9.75 crores on Saturday at domestic box office.

On Sunday, Multi starrer faced limited jump than Saturday and minted the amount of 11.63 crores. With this, total collection of Kalank after the 5-days extended opening weekend, has become 66.03 crores at domestic box office

Kalank is made on a budget of Rs 150 crore. The film is a period drama, directed by Abhishek Varman. The makers of Kalank strategically chose April 17, Mahavir Jayanti – a partial holiday – for the release as it is followed by an extended weekend with Good Friday on April 19.