T-Series has consistently been bringing audiences the best in music, even during these troubled COVID-19 times. The music label now presents ‘Govind Bolo’, in Jubin Nautiyal’s soulful voice, as he puts a contemporary sound to this ode to Lord Krishna. 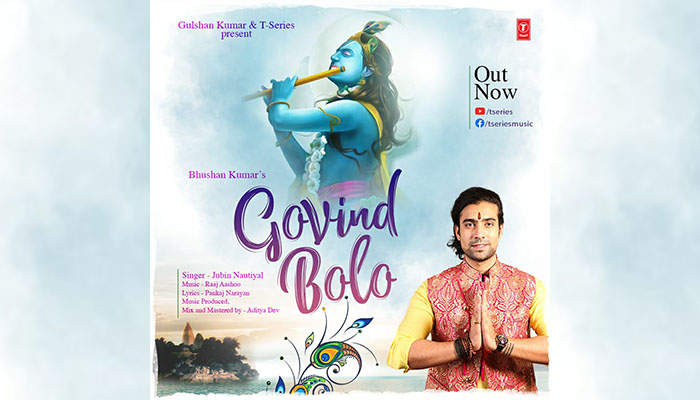 Jubin recently celebrated the massive success of Kabir Singh’s ‘Tujhe Kitna Chahein Aur Hum’ and ‘Tum Hi Aana from Marjaavaan.’ He also collaborated with the country’s biggest music label on ‘Meri Maa’, a special song dedicated to mothers on the occasion of Mother’s Day. Jubin Nautiyal now gives us a modern yet soulful rendition of ‘Govind Bolo,’ a paean to Lord Krishna. Jubin has earlier done a devotional offering titled ‘Ganesha’ as praise to the Elephant God.

Spreading the message of positivity and hope, ‘Govind Bolo’ is composed by Raaj Aashoo, with lyrics by Pankaj Narayan and is produced, mixed and mastered by Aditya Dev. While the song has been in the making for a while, the finishing touches were added during the lockdown period. There couldn’t have been a better time for the song’s release, as it’s natural to turn to a higher force in challenging times such as the current global pandemic.

Says T-Series head honcho, Bhushan Kumar, “Jubin Nautiyal’s signature as an artist is that he brings a lot of feeling and soul to his music. Whether it’s a sad song or a romantic one, most of the songs that Jubin has sung have an ethereal quality to them. That’s what made ‘Govind Bolo’ the perfect song for him. This song has a lot of light and vibrance and we wanted to give audiences something uplifting and encouraging during these difficult times.’

Talking about what makes this song special Jubin Nautiyal says, ‘When Raaj Aashoo sent me the song, I could hear myself sing it and I knew a song like this was the need of the hour. People were more inclined and connected — devotionally and emotionally — before the digital boom took place. As time progressed, a lot of the authenticity of Indian culture, devotion and emotions was lost. The lockdown is giving us time as a country, to decide where we want to go from here and devotional music reminds us of who we are, takes us back to our roots and spreads light.”

He adds, “With devotional music, cracking the right soul is important as your audience shouldn’t lose connect with the song even for a second. Lord Krishna has been my favourite. The point where darkness and light meet is where Lord Krishna lives and he shows us the right path.”

Bhushan Kumar’s T-Series presents ‘Govind Bolo.’ Sung by Jubin Nautiyal and composed by Raaj Aashoo, the song has been produced, mixed and mastered by Aditya Dev, with lyrics by Pankaj Narayan. ‘Govind Bolo’ is out now on the T-Series YouTube channel.