The sunshine girl Jacqueline Fernandez is constantly running busy with the busy schedules of her film promotions and releases. These days, the actress is riding high on the promotion of her next with Kichcha Sudeep named Vikrant Rona’. Yesterday only, we spotted her in a sizzling hot indigo saree, and today she is shining up bright in a pearl white dress. 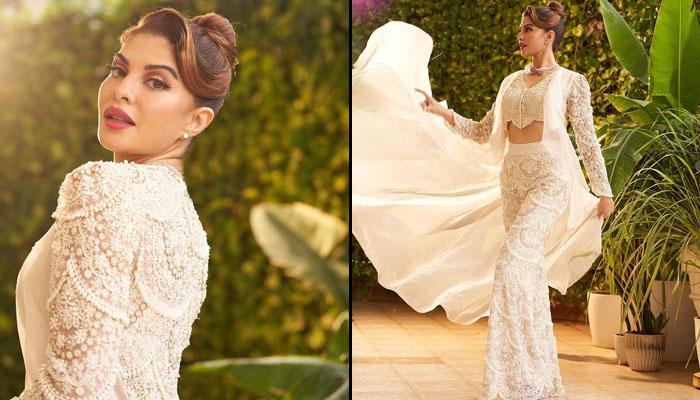 At the trailer launch event of ‘Vikrant Rona’, Jacqueline was spotted wearing a white Plazo with a full sleeves top taking a transparent white long jacket. The actress took to her social media while adding a caption – “🤍🤍🤍 #rararakkamma in mumbai ! 🤍🤍🤍”

The audience is loving the Kichcha Sudeep and Jacqueline’s chemistry in the new song ‘Ra Ra Rakkamma’ from ‘Vikrant Rona’ and even today the trailer received a great response from the masses.

At the trailer launch, Jacqueline Fernandez spoke about being part of VR saying, “Honestly, it was, even after all the work I have done, over these years. When I walked onto the sets of ‘Vikrant Rona’ for Rakkamma, I wasn’t shocked, because this was in 2021, post the second wave, they took necessary precautions, and the amount of work they put into making sure everybody is safe is worth mentioning. I felt like there were a thousand people on the set, it really was magnanimous. It was surreal. I couldn’t believe, how perfect the set was.”

On the work front, other than ‘Vikrant Rona’ the actress will be seen in ‘Cirkus’ directed by Rohit Shetty, ‘Ram Setu’ with Akshay Kumar and Nushrratt Bharuccha, and even ‘Kick 2’ in the pipeline.