One of most-awaited movie of Sanjay Leela Bhansali’s Inshallah, which is scheduled for an Eid 2020 release. Starring superstar Salman Khan and Alia Bhatt in lead role. Amidst much anticipation, there is some interesting news out for all Salmaniacs. 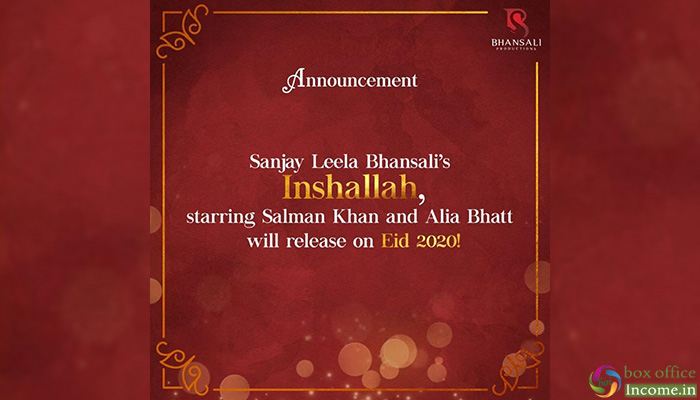 Yesterday, Alia Bhatt shared the announcement on Instagram “Agli Eid – Inshallah,” she captioned the post. Actor Jacqueline Fernandez, who has worked with Salman in films like Race 3 and Kick, commented that she could ‘can’t wait’ for the film.

Also, Salman Khan too took to Twitter to welcome Alia on board. He tweeted, “It’s been 20 years but I am glad Sanjay and I are finally back in his next film, Inshallah. Looking forward to work with Alia and inshallah we will all be blessed on this journey.”

Salman and Bhansali have worked together in films like Hum Dil De Chuke Sanam, Khamoshi: The Musical and Saawariya. This will be Alia and Salman’s first film together. Their pairing created controversy when the film was announced as people could not digest the age difference between the two.

Sanjay Leela Bhansali’s last directorial project was the 2018 hit film ‘Padmaavat’, starring Ranveer Singh, Deepika Padukone and Shahid Kapoor. Salman will next be seen in Prabhu Dheva’s ‘Dabangg 3’ while Alia who was last seen in the period drama film ‘Kalank’ is shooting for ‘Brahmastra’ alongside Ranbir Kapoor in Varanasi.