Highly awaited fourth installment from the Bollywood’s popular comedy franchise Housefull is all set to hit theaters this Diwali on 25th October 2019. Directed by Farhad Samji, Housefull 4 is strongly buzzing among fans since the time when it’s announcement was made. 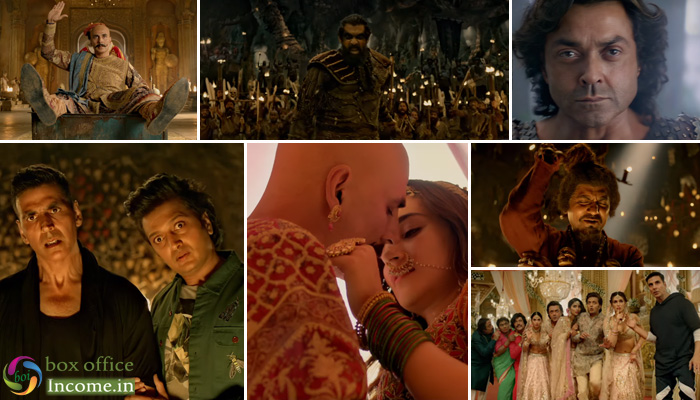 Recently Housefull 4 hit the headline with it’s first look posters that were released on September 26. As per schedule a day later, makers launched it’s official trailer at an event held in Mumbai. The promo looks hilarious. The 3 minute and 37 seconds trailer reveals the crux of the storyline at the beginning that the reincarnation comedy is set in two time periods: 1419 and present times.

Then the trailer shifts to the king of Sitamgarh organising for a sayamvar for his daughters. The king zeroes in on warrior Bala (Akshay Kumar) for Kriti Sanon (Madhu), Bobby Deol (Dharamputra) for Kriti Kharbanda (Meena) and Riteish Deshmukh (Nartaki Bangdu Maharaj) for Pooja Hegde (Mala).

The first half also offers menacing glimpses of Rana Daggubati, who has replaced Nana Patekar in the film to play the villain.  Akshay Kumar, who can remember the happenings of his past life as Bala, suddenly realises he is engaged to be married to Pooja Hegde, who is Pooja now. Modern day Riteish’s love interest in the film is Kriti Kharbanda, who is Neha now where as the 2019 version of Bobby Deol is in love with Kriti Sanon, who is Kriti in this life.

In a failed attempt, Akshay tries to explain who’s actually who with reference to 1419 to his friends in an ROFL “uski biwi uski biwi nahi hai… teri biwi hai…” kind of a lengthy dialogue, which leaves all of us confused.  The Housefull 4 trailer also a glimpse of Nawazuddin Siddiqui delivering his Sacred Games dialogue: “Kabhi kabhi lagta hai apunich bhagwan hai.”