This Friday released, Sonakshi Sinha starrer Khandaani Shafakhana has taken a poor start at the box office despite negative feedback. While the Hollywood offering Hobbs & Shaw has received a terrific response from the audience in metro cities across India and registered an excellent opening. 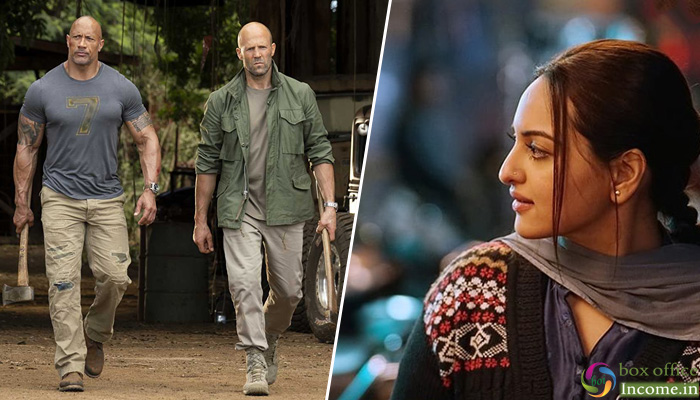 It is a spin-off of The Fast and the Furious franchise centered around the titular Luke Hobbs and Deckard Shaw, characters introduced in the main series. Hobbs and Shaw has an impactful story-line with excellent performances by the leading actors Dwayne Johnson as Hobbs and Jason Statham as Shaw.

Being the highly-awaited film, David Leitch’s directorial has taken a solid start with 30% occupancy in the morning. Post noon shows, Hobbs And Shaw witnessed significant growth and bagged the amount of 13.15 crores nett from 2100 screens nationwide including English, Hindi, Tamil & Telugu versions.

While Sonakshi Sinha, Varun Sharma and rapper-turned-film actor Badshah starrer comedy drama Khandaani Shafakhana remained at the back foot. Directed by Shilpi Dasgupta, it has not received much response as compare to earlier expectations.

On the first day, Khandaani Shafakhana recorded below average occupancy of 8% and garnered the opening business of 0.80 crores only. Although it has received negative reviews from critics but viewers are giving mixed reactions, so there is a little chance for it to register decent weekend.